Thursday’s Girl by Shag (All Photos By Gail, Click on Any Image to Enlarge)

Retro-Modern Design, Tiki Bar Culture, Cocktail Parties and Vinyl Records. Everything fabulous and swingin’ that made the late sixties and early seventies the best time to be alive are reoccurring themes in Thursday’s Girl, the new series of paintings by artist Josh Agle, known as Shag, on exhibit now at Jonathan LeVine Gallery.

Detail from Party Scene, Above. Notice that the men in this painting have horns on their heads. I will let you figure out what that is supposed to mean

There’s a party — or party vibe — of some kind going on in nearly every painting: whether it’s a large gathering of hedonistic revelers, the exterior shot of the house inside which the party is happening, or simply Thursday’s Girl shown playing her guitar as she relaxes with a martini and her cat. 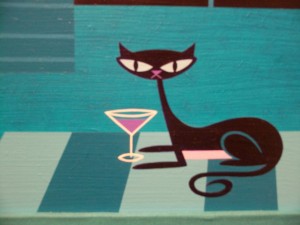 Each painting has a  QR code next to it which, when scanned, will tell you something cool and informative about what is going on in the painting. I couldn’t read these little secret stories, however, because I have no smart phone. Don’t forget to bring your Smart Phones! 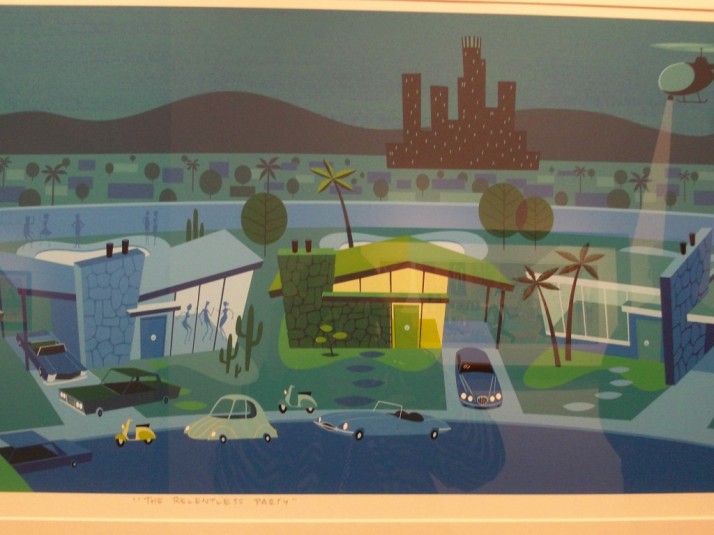 Painting Detail. There is probably a Key Party going on inside this house.

If you read the official Press Release on Thursday’s Girl, you will learn that “this series of paintings were inspired by All Tomorrow’s Parties, the classic Velvet Underground song in which lyrics written by Lou Reed spoke to New York’s downtown art scene found in places such as Warhol’s Factory.” The underlying theme turns out to be kind of a bummer — like a visual depiction of Poison’s “Fallen Angel,” if you will — but I didn’t want to focus on that. To me, these paintings were like a cross between Disneyland and Mad Men — two of my favorite things in the world. So, I choose to remain ignorant of their darker meaning.

I think we can agree that this is supposed to be the Velvet Underground.

And the party was not just going on within the art. As the minutes ticked on, Saturday’s opening reception turned into quite the social scene. I was very happy to run into artists Beau Stanton and also Joseph Arthur, whose current exhibit is still up at Able Fine Art. Party at Jonathan LeVine!

You should definitely go see this exhibit while you can, because it is just amazing. Shag Rocks!

Thursday’s Girl By Shag will be on Exhibit through May 4th, 2013  at Jonathan LeVine Gallery, Located at 529 West 20th Street, 9th Floor, in the Chelsea Gallery District.