Above Graphic and Most Photos By Kat Bentley, Except Where Noted

The Metropolitan Museum of Art has possibly the broadest collection of art in the world; spanning more than 5000 years of objects from across the globe — from the first cities of the ancient world to works being created today. In my 30 years of living in NYC, I’ve visited the museum maybe a hundred times, and I’ve barely even begun to explore its hundreds of galleries. While a dozen new exhibits open at The Met each season, offering no shortage of incentive to plan a visit, what can be really exciting is to discover the hidden works in the museum’s collection that you might otherwise walk right by and never notice. That’s one reason why I couldn’t pass up the opportunity to attend a press preview of a new Met tour called Unhung Heroes of the Metropolitan, offered by the popular Shady Ladies Tours. As you might infer by the cheeky name, Unhung Heroes explores male members in paintings and sculptures across the museum, and it is all kinds of crazy fun! 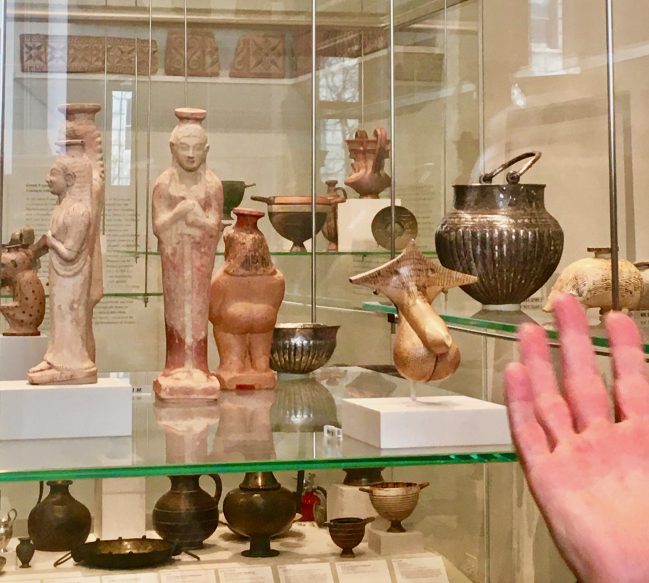 Expertly guided by Professor Andrew Lear, the founder of Shady Ladies Tours, the Unhung Heroes tour explores the naughty side of classic artworks, and considers burning questions such as:

Are the members in these artworks true to life size?

Were men really smaller back then?

Why are many of the statues’ missing body parts?

Is there hidden phallic symbolism in your favorite painting?

One of the first things Professor Lear will introduce you to are the aesthetic ideals of Greek culture and how they have affected the history of art without clothes.  In these ancient times, penis size as depicted in artworks was a reflection of a man’s social status. If a man was of high status, he will generally be depicted with a smaller penis, as a sign of refinement and class. 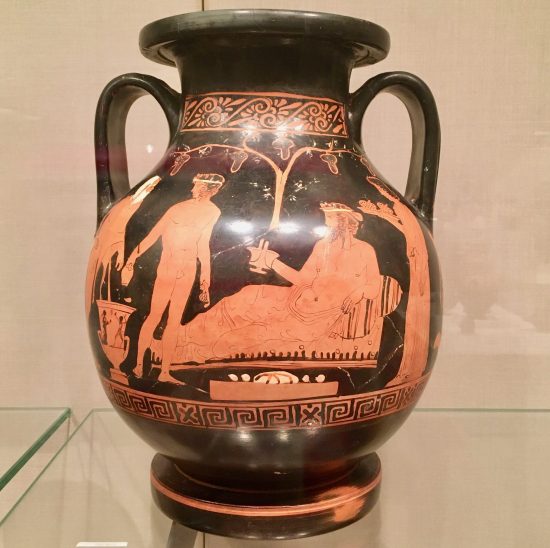 For example, this wine vessel depicts a scene of Dionysus, the ancient Greek god of wine, and one of his man-servants. You can see that Dionysus‘ junk is completely covered up, while his servant, though naked, has a very modest penis.

By contrast, this adjacent, carved figure of a reclining, overweight and quite unattractive man has his stuff all out on display, which was considered vulgar and low class.

Dr. Lear really knows where to find all the fun examples of large members being associated with beasts as opposed to fine gentlemen. The above pottery shard shows a drunken Satyr (half goat and half man) with an obvious boner who is so wasted he doesn’t even notice that a donkey is walking over him. The word printed above him is his name, which translates to “Not Beautiful.” I love that story.

Other sexy facts about the ancient Greeks that you might enjoy knowing:

Greek men worked out constantly and they did so completely in the nude. The word Gymnasium literally means “Naked Place.”

More Penises After the Jump! 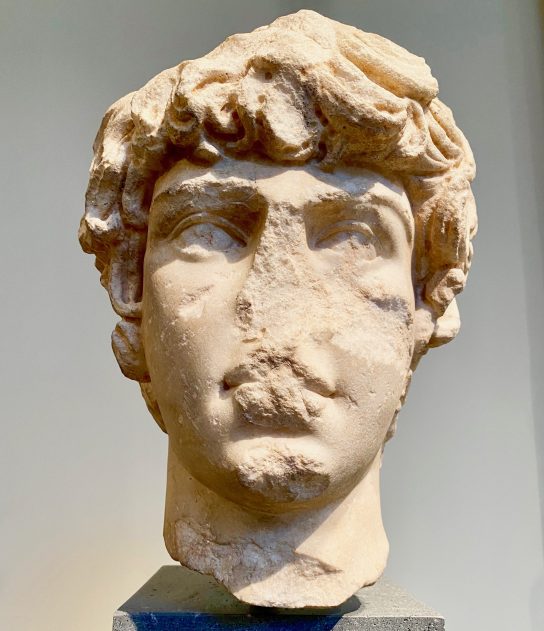 Raising the question of what had happened to statues that are missing body parts, Professor Lear explained that many of these ancient works were found amid ruins, so it stands to reason that their more fragile features such as noses, penises and lower arms, might break off. Where you can tell the difference between parts that broke off naturally and those that were removed deliberately (by prudes or puritans, etc) is where the part appears to have been chiseled off. Case in point, this head that was once part of a monumental statue (dating back to 130 – 138 AD) of the Roman god Antinoos, on which the nose has quite clearly been removed by a tool. 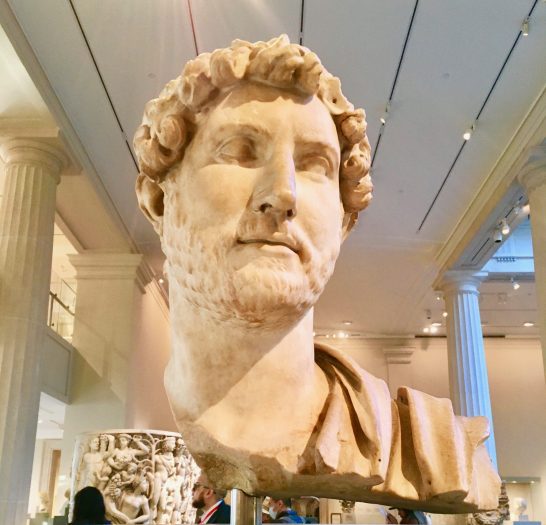 Antinoos, you will find out, was the ‘Boy Toy’ of Emperor Hadrian (photo above). Although Antinoos was a mortal man, he was posthumously defied by Hadrian after he drowned under mysterious circumstances at age 19. Fascinating. At any rate, you can see why someone might want to chisel his nose off.

If you’ve walked through the halls displaying the Arts of Africa, Oceania, and the Americas (also known as the Michael C. Rockefeller Wing) you will have noticed the nine 15-foot-high Asmat Bis Poles collected by Rockefeller in the early 1960s. 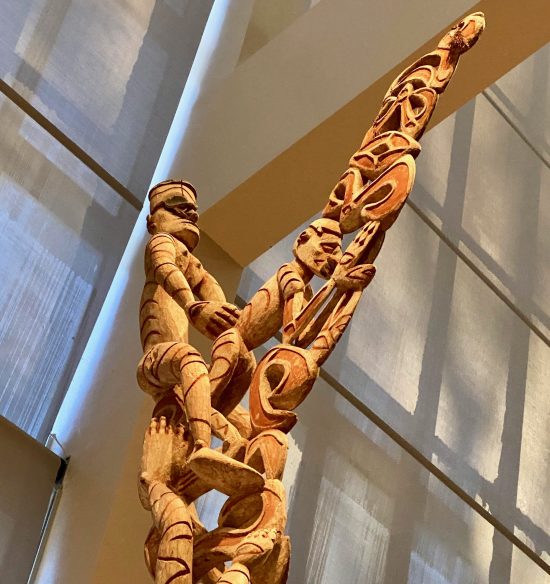 While there is some obvious sexiness going on here, these carved figures depict a ‘Sperm Transfer’ which is a coming-of-age-ritual for young men in this particular culture. 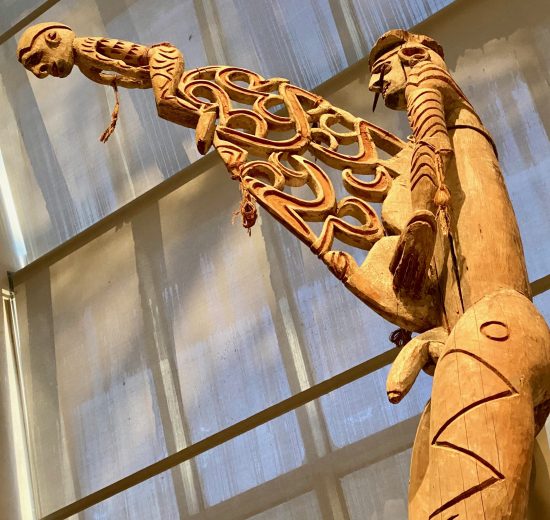 It does not look like much fun to me!

From New Guinea, we traveled over to a collection of paintings by the Dutch masters. This painting is called Merry Company on a Terrace, by Jan Steen (1670) and there is a ‘dick joke’ in there somewhere. You are going to have to take the tour to find out where!

Merrymakers at Shrovetide by Frans Hals (1616–1617) depicts a group of drunken revelers celebrating Mardi Gras. Take a closer look at the woman in the center of the scene and certain secrets will be revealed. 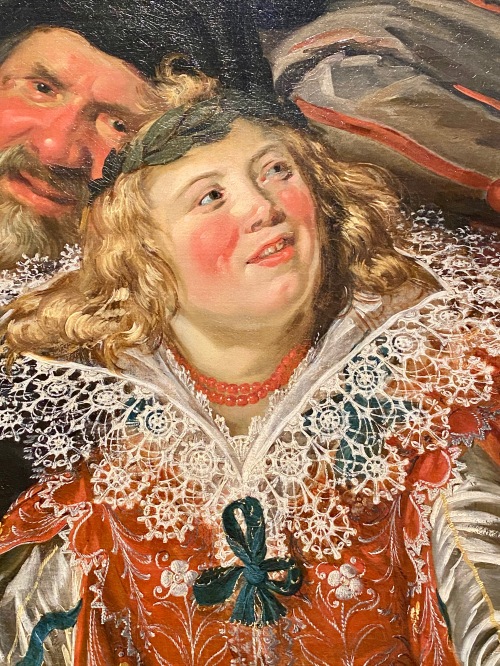 Also, someone’s looking to get lucky.

Next, we made a stop in front of Marcantonio Pasqualini (1614–1691) Crowned by Apollo (1641) by Andrea Sacchi. Here’s the Readers Digest-condensed-version of what’s going on in this painting:

A celebrated male soprano, Pasqualini is crowned by Apollo, who had been victorious in a musical contest with the satyr Marsyas (shown in the background, defeated and tied to a tree with his bagpipes beside him).

There is a ‘penis backstory’ about every character in this painting. But I’m not going to spoil it for you, because I want you to take the tour.

Yes, Someone Brought a Tiny Dog on the Tour!

Art History Bonus: In this painting, Apollo is loosely based on the famous ancient sculpture known as the Apollo Belvedere, which Professor Lear is showing us in this photo.

So that you will not get bored with all of the penises, Unhung Heroes gives a bit of equal time to the ladies of art. Something that you may notice if you really look at female nudes of the 1700s and earlier is that women were painted naked as their bodies looked when fully clothed in the fashions of the day. In Toilette of Venus (Venus at Her Vanity) by Francois Boucher (1751) you can see that Venus’ breasts are very high up on her chest, almost by her shoulders, because it was the style for dresses to push a woman’s breasts upward, almost over the top of her dress. Hello!

Something similar is going on with the three goddesses at the center of The Judgement of Paris (1528) by Lucas Cranach the Elder. The breasts of the center goddess, who also happens to be Venus, are pushed to either side of her chest, leaving an expanse of flat sternum, because dresses of that time pressed the breasts very flat. Ouch.

This is such a fantastic piece: The Age of Bronze (1876) by the great Auguste Rodin. Although it is among the collection’s comparatively recent works, and based on a living model, the statues’ package is on the small side because Rodin wanted the viewer to focus on the way the muscle groups look when a person strikes this particular pose. I think you will agree that the penis the last thing you notice.

Unhung Heroes of the Metropolitan will make its public debut on Saturday, March 14th, 2020 at 1:15 PM, with more dates to be announced. Groups meet 15 minutes in advance of tour time at the feet of the statue of Pharaoh Amenhemet II in the Great Hall. Tickets are $69 for adults, $59 for seniors, $49 for Met members, and $39 for students. You are free to explore the rest of the museum on your own once your tour ends, so it is a great value.  The Metropolitan Museum of Art  is located at 1000 Fifth Avenue and East 82nd Street. Visit Shady Ladies Tours Dot Com to purchase tickets now, because this event will sell out quickly!

One thought on “Discover Sexy Secrets of The Met On The Unhung Heroes Tour!”