His wife, Meryl Streep, may be one of the world’s most famous actresses, but American sculptor Don Gummer is taking his turn on Broadway right now, in the form of a major exhibition of his large-scale sculptures. Don Gummer on Broadway, the artist’s first outdoor public art exhibition in New York City, features nine aluminum and stainless steel sculptures placed along the Broadway malls, adjacent to subway stops, from Columbus Circle (8th Avenue at 59th Street) to 157th St.

Geoffrey and I were in Central Park last weekend and saw a couple of these fun sculptures, including the one above. Mondrian which is, of course, an homage to the famous painter, sits in the plaza at 64th Street and Broadway, across the street from Lincoln Center. It is made from painted aluminum and stained glass, and it’s absolutely gorgeous.

Mondrian is one of five examples of new work from Gummer’s Haiku series, created in 2014 and 2015, which were created especially for this exhibition. The four additional works included in the exhibition date from 2011 and 2012. The sculptures range in height from eight feet to fourteen feet.

“I first became interested in haiku poems because of the simplicity of their structure,” Gummer states in a press release. “Three lines stacked together containing 17 syllables. Five in the first line, seven in the middle, and five in the third line. I thought of substituting shapes for the syllables and instead of writing a poem with three sentences and 17 syllables, I made a sculpture with three vertical sections and 17 shapes, five in the bottom section, seven in the middle, and five in the top section. The three sections are separated by horizontal, linear flat rectangles, my version of lined paper.

The remaining four sculptures have similar stacked elements, and  structurally relate to the others. This one, called 12-12-12, is on the north side of the Columbus Circle Plaza.

Don Gummer on Broadway will be up through October 31st, 2015. See the diagram below for the exact location of each sculpture. A cell phone tour, in English and Spanish, which includes the artist’s commentary, is funded by Con Edison. 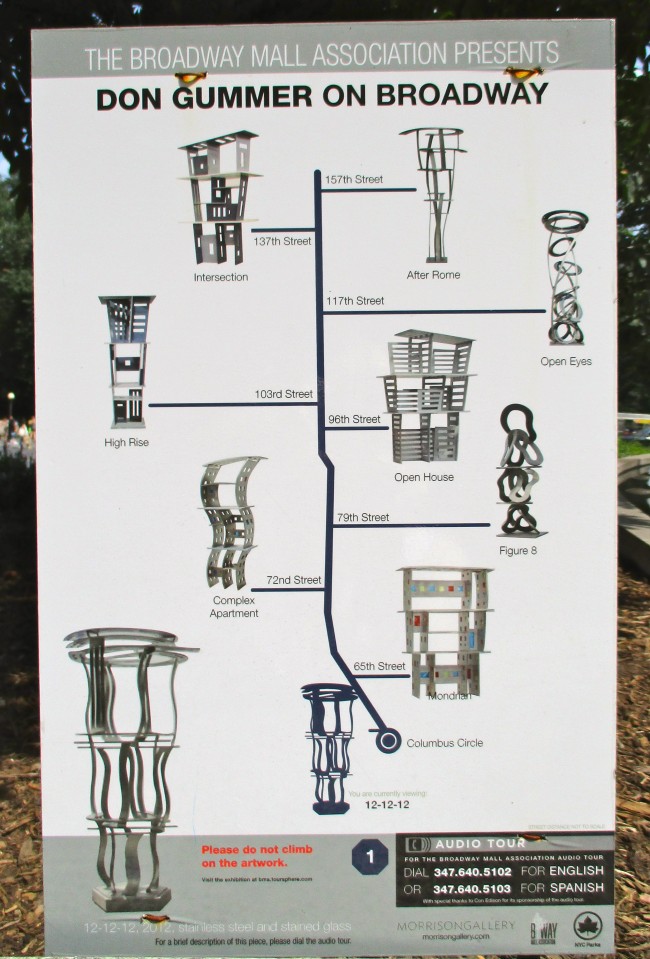