Artist Statement:
These pieces of art are all things I created from my cell on death row, where I spent 18 years for a crime I did not commit. During that time, I had to scavenge for any supplies I got, often bartering for them in the prison underground.

I eventually received ordination in the Rinzai tradition of Japanese Buddhism. This is the same tradition that trained the samurai in ancient Japan. It was this background which was the driving force behind much of my artwork. Most of it was the result of me attempting to turn my cell into a shrine, where I would practice meditation from 5 to 7 hours a day.

Most of the pieces I created over the years were either given to friends as gifts of gratitude or destroyed by vindictive prison guards. These pieces are all that remain of my 18 years in Hell.

This collection will showcase a series of drawings, collage works and a set of craft items Damien made while in prison. Both originals and prints will be available for purchase.

About Damien Echols:
Damien Echols is best known as part of the wrongfully imprisoned West Memphis Three. Echols has been well-documented in books, films, songs and more. After his release in August of 2011, after 18 years on death row, Echols got the chance to document it himself in his just-released memoir, Life After Death: a frustrating, honest and surprisingly joyful account of a life lived under trying circumstances.

This Exhibition’s opening reception is not open to the public. Visit Brown Paper Tickets to purchase tickets for $10.00 each. A portion of the ticket sales will be donated to Dharma Friends Prison Outreach Project.

About Dharma Friends Prison Outreach:
Dharma Friends Prison Outreach Project is under the umbrella of our non-profit foundation, COMPASSION WORKS FOR ALL which helps to support and promote those efforts that benefit the most forgotten and most disenfranchised in our world. All of our projects support the teaching and development of compassion as the most effective tool to bring healing to the world. More info on Dharma Friends can be found at. http://dharmafriendsprisonoutreachproject.com/

In celebration of what would have been John Lennon’s 71st Birthday this coming Sunday, Lennon’s widow Yoko Ono, in association with Bag One Arts will present Gimme Some Truth, a four-day exhibit of John’s original art work in a pop-up gallery space downtown.

On view will be nearly 100 limited edition drawings and song lyrics that John created from 1964 to 1980 – including a never-before seen piece titled On Cloud Nine. My guess is it’s going to be similar to the exhibit of John’s work that I saw in October of 2008. All artwork is for sale with proceeds benefiting City Meals-on-Wheels. A $2 donation at the door also goes to support the programs of this organization, which provides hot meals to homebound elderly New Yorkers. So, head down to Soho this weekend (remember, Monday is a holiday for most) to remember John, see some art and help feed some hungry people! 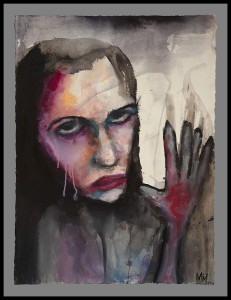 Multi-talented and controversial artist Marilyn Manson has donated one of his original watercolors depicting photographer Grove Pashley’s infamous image of Damien Echols with his hand on the glass of the prison window during a visit. This original piece will be auctioned to raise money for the defense fund of Damien Echols (who is on death row), Jason Baldwin and Jessie Misskelley Jr. — also known as the West Memphis Three (www.wm3.org) — who were convicted for murdering three elementary school children in 1994. Since the horrific crimes, DNA from the crime scene and victims was tested by Bode, the country’s most trusted crime lab, and none of it matches these three unjustly imprisoned men. For three weeks starting December 5th, Judge David Laser will be holding an evidentiary hearing for the three men to review all post conviction evidence.

The auction will last for 18 days — from July 13th to July 31st — one day for each year the West Memphis Three have spent behind bars. June 3, 2011 marked the 18th year that Damien Echols, Jason Baldwin and Jessie Misskelley Jr. have been behind bars for crimes they did not commit.

For further information about this original artwork and to place a bid, log on to Skeleton Key Auctions or Marilyn Manson Dot Com.

See Also:
Marilyn Manson at Golden Gods 2010 speaking on behalf of the WM3 at This Link

Marilyn Manson on A&E Biography showing the piece for auction (about 4:13 in) at This Link