Walking into the Steven Kasher Gallery last night for the opening reception of Rude And Reckless was very much like flashing back to my teenage bedroom, whose walls were plastered floor to ceiling with Punk Rock posters, show flyers, stickers and album cover art until I moved out of my parents house to go to college. Punk Rock – at a time when Punk Rock was really something vital and alive – was everything to me at that time, and I was an avid collector of 7” Punk singles (which I’d pick up by the dozens at Zed Records in Long Beach, California) and punk/new wave badges. A lot of what I collected, and probably still have, seems to have been magically curated into this amazing collection of memorabilia that is sure to delight anyone who has fond memories of the British, New York or LA/Orange County punk scenes in the late ‘70s to early ‘80s. Good times. 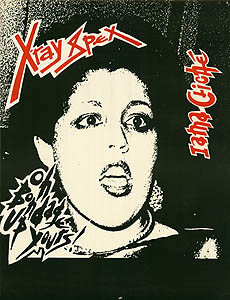 Rude and Reckless: Punk/Post-Punk Graphics, 1976-82 is the first New York exhibition surveying the extraordinary diversity of Punk and Post-Punk graphic design. The exhibition showcases a wide range of American and British artistry, with influences that include the Bauhaus, Futurism, Dadaism, Pop Art, Constructivism and Expressionism. The exhibition features over 200 rare posters, along with fanzines, flyers, clothing, badges and stickers.

Rude and Reckless documents an era that produced a great burst of applied graphic-design creativity, one of the most subversive of the 20th Century. Vivid, violent and frequently acid-tongued, the works in this exhibit represent one of the truly authentic DIY youth culture movements of the Western World. The exhibition is timed to coincide with the 35th anniversary of Punk Rock; both the release of the first Ramones album, and the mythical (and notorious) Anarchy in the UK Tour were seminal punk events in 1976. The exhibition is based on the collection Andrew Krivine, who began collecting in 1977. Curated by Krivine and Steven Kasher, the selection comprises the rarest and finest examples culled from an archive of more than 800 punk/new wave/post-punk posters and ephemera.

Article continutes with more photos and exhibit information after the Jump!  END_OF_DOCUMENT_TOKEN_TO_BE_REPLACED