Dress Code By Robert Deyber (All Photos By Gail)

Pop Surrealism is a genre of painting that never gets tiresome for me. Connecticut based Artist Robert Deyber paints realist-style visual renderings of clichés, euphemisms and popular sayings or phrases, to create surreal, dreamlike tableaus that really take the viewer elsewhere. I love his work. 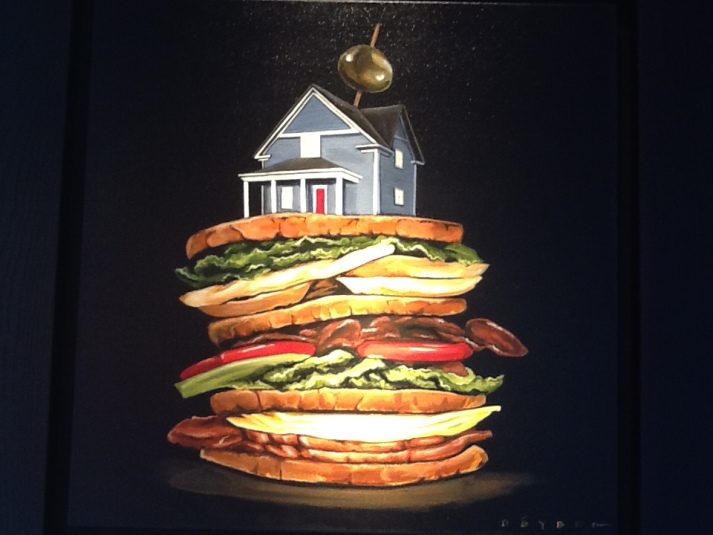 Despite his keen sense of humor and the visually absurd, Robert Deyber is a seriously skilled painter. Much like solving Rebus Puzzles, the fun in observing Deyber’s paintings is trying to deduce the title from the images on the canvas. Sometimes it’s really easy and obvious, and at other times quite confounding. You can even make a game of it with your friends!

Here are some of my favorites from Thursday night’s opening reception, where I had the chance to meet Robert, and he was very nice! 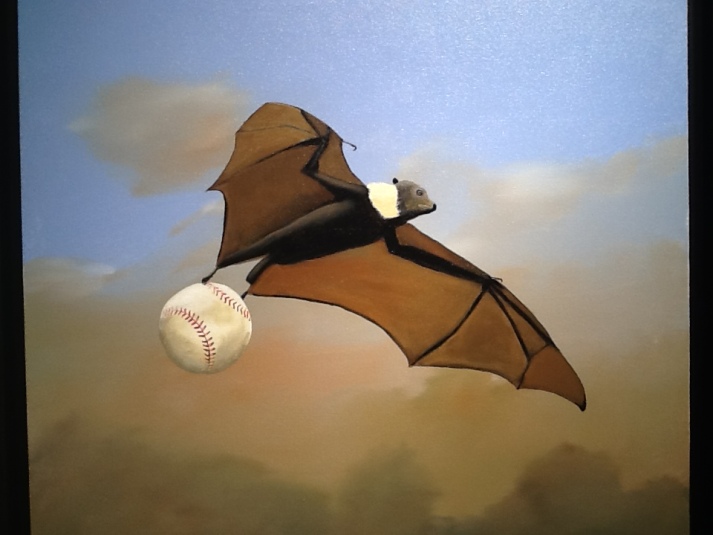 Martin Lawrence Galleries is located at 457 West Broadway (Between Houston and Prince) in Soho, NY.

I’ll let you guess what this one is called.

Memorial of the Forgotten By Jeff Soto

Just when you thought the art reporting on this blog couldn’t get any more exciting, Jeff Soto, one of our very favorite American contemporary artists, returns to Jonathan LeVine Gallery for his fourth solo exhibition! Having been deeply affected by the  recent passing of two of his grandparents, Soto’s new series of works Decay and Overgrowth is his memento mori of sorts. For Decay and Overgrowth, Jeff maintains many of his signature motifs while incorporating a distinctive fecundity in the  broad use of new colors, such as mossy green, and images of plants and vines that entwine through skulls in a series of paintings that seem to personify the members of Soto’s family.

Expanding upon the themes explored previously in Lifecycle, Soto’s solo 2010 exhibition, works in Decay and Overgrowth deal with the passage of time, early man and life after death, as well as primitive myths and legends attempting to explain the unknown. A connective thread of mortality runs throughout the work, conveying themes such as the transient nature of life, brevity of the average lifetime and inevitability of death.

Soto selected symbols of hope and growth to symbolize the cycle of life, death and rebirth. Organic shapes and elements such as mountains, plants, flowers, rocks and crystals are juxtaposed with manmade objects such as cell phone towers, weapons, polished gems and modern architecture. The resulting imagery combines a bit of magic, unanswered questions and a glimpse into the unknown.

I found this exhibit to be deeply moving and also life affirming. Jeff Soto was at the opening reception on Saturday and he was just the nicest person you could meet, signing a card for me and also posing with his art for this post. Thanks Jeff for your beautiful art and also for being so cool.

Jeff Soto’s Decay & Overgrowth will be on exhibit through October 6, 2012  at Jonathan LeVine Gallery, Located at 529 West 20th Street, 9th floor New York City. Gallery Hours are Tuesday through Saturday, 11:00 AM to 6:00 PM.