When I was fifteen years old, I had the most ridiculous crush on a guy named Tom, who was the college roommate of my sister’s boyfriend. Although my adolescent longing for Tom’s relentless hotness went thoroughly unrequited, he and I did have a sweet sort of friendship. Lots of times, my sister would let me tag along on visits to her boyfriend’s apartment, and we would all listen to records together. Besides Frank Zappa’s Freak Out and Just Another Band From LA, Tom introduced me to an LP that made a strong and lasting impression on me; the just–released (at the time) Steely Dan epic, The Royal Scam. Like any Beatles album you can name, The Royal Scam is a true masterpiece of recorded music. Covering diverse and controversial themes ranging from drugs, race relations, illegitimacy, birth control and scathing criticisms of the American Dream, each song is pure pop-sophistication; a sometimes gritty, often cryptic journey ready to unfold aurally once the needle hit the groove. Maybe it was initially because Tom turned me on to The Royal Scam, but nevertheless, I just fell in love with the record immediately. To this day, it’s still one of my favorite albums of all time.

This summer, Steely Dan’s Donald Fagen and Walter Becker are giving fans what they want on the group’s 28-date Rent Party ’09 Tour. Not only is the band taking song requests online, but they’re also playing classic albums – The Royal Scam, Aja and Gaucho – in their entirety on select nights. I haven’t spent my own money on a concert ticket since I paid $350 to see Paul McCartney at Madison Square Garden more years ago than I can count. But when I found out I would have a chance to see and hear Steely Dan perform The Royal Scam, dishing out $172 (for a third row seat, not bad) did not seem like much of a sacrifice. Because there is no other band on the planet that does what Steely Dan does. And this was The Royal Fucking Scam, man! 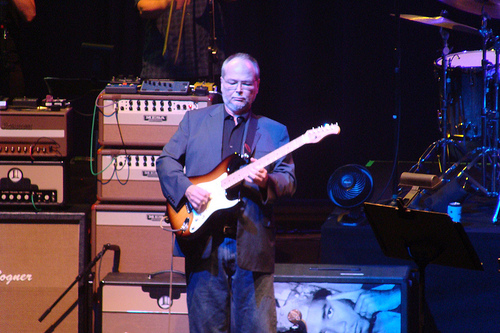 Besides the fact that Fagen and Becker are studio geniuses, they also play with a band that can only be described as “Musician’s Musicians.” This tour includes the legendary Jazz guitarist Larry Carlton (who played on the original Royal Scam sessions) and drummer Keith Carlock, who consistently garners the Number-One-Pop-Drummer spot just about every year in the Modern Drummer Readers’ Polls. In this way, Steely Dan are able to authentically replicate the studio sound of the album while adding the warm, human vibe that you want in a live show experience. It was, seriously, so amazing, and worth every penny. It was also worth enduring the torture of the clueless dick sitting behind me, who very loudly clapped along (two inches from my left ear) with each song, in four-four time, for two hours straight, until I wanted to brain him with baseball bat, and the couple sitting next to me who forced me out of my seat every fifteen minutes because they had to go outside to smoke. Seriously guys, if you can’t even live for two hours without a cigarette, maybe you should just kill yourself.

The Royal Scam only takes about 45 minutes to perform front to back, so after the final notes of “The Royal Scam” had faded, the band also performed over a hour of hit-after-hit, including “Hey Nineteen,” “Black Friday,” “Josie,” “Aja,” “My Old School,” “Babylon Sister” and a dozen others. I think they might have done “Reelin’ In The Years,” but honestly, I could have just imagined that. I didn’t take any notes on the set list and the night is already pretty much of a blur. And yes, I did think about Tom more than a few times during the set, and wondered if he’d be attending one of these amazing shows wherever it is that he lives now. Ah, to be fifteen again. If you enjoy having your mind blown, do get tickets to see Steely Dan on the Rent Party Tour when they come to your town.

A Blog Of Neat Things!

Check Out Our Rad Archived Posts!