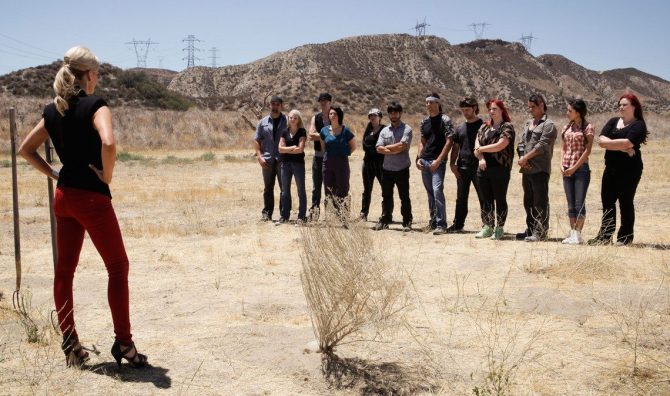 As we open, everyone is at the house talking about how much they just want to beat Anthony, who has won all previous challenges. Will tonight be their night?

Contestants arrive in the desert surrounded by a group of sign-bearing pitchforks planted in the earth. McKenzie says “Welcome to Hell” as she introduces their next challenge: each pitchfork bears the name of a demon from a different world culture. Working in teams of two, they will bring one of these demons to life. Hell, Yeah!

The teams and their chosen demons are:

McKenzie leaves them out in the desert to sketch for thirty minutes in the scorching heat. Alex and Autumn chose a gargoyle theme for Pazuzu and think they nailed it. House and Megan have Azi Dahaka, which means ‘fiendish snake.’ He will have a snake arm. Eric and Wayne’s Chort has a pig face, and they are expecting to get into ‘top looks’ already. Alam and Anthony want to make their demon, Deumas, beautiful to take her away from the grotesque nature that everyone else will surely embrace.

Back in the lab, Eric F looks for electronics to incorporate into his demon. He and Wayne want to give it animatronic, blinking eyes with an elongated head covering the eye mechanism. Team Redhead’s Eurynome is Grecian Demon which will be covered in sores. They start their facial sculpt with small horns and gnarly, wolf- like teeth. Katie wants to do a “walker,” a creature with very long arms. Jenna hopes they can pull it off.

Recap Continues, After The Jump!

Abraxas is an Egyptian demon with the head of a lion and a whip. Eric Z wants to use browns and beiges to convey a scorched earth-feel. House has gotten very ambitious with his and Meagan’s dude, and he plans to make a full head piece, facial prosthetic, snake glove and back piece. That’s a lot to do, but their sketch is amazing. Meagan is working on the snake “puppet” but House thinks she is taking too long. He takes over on the piece and Meagan is worried that none of her ideas will come through in the finished demon.

Anthony and Alam’s goddess demon has chicken feet sculpted by Alam and horns on her head that will attach to a facial prosthetic made by Anthony. She is a Hindu goddess/demon and the sketch looks a bit like Shiva.

Alex worries that her and Autumn’s individual contributions may not marry well together.

Jenna is having a medical issue due to a tumor on her hand that is slowing her down physically as she sculpts. She is worried about letting her partner down.

McKenzie shows up with a surprise twist! Producers, she explains, often add script notes that completely change the plan, and the script note she brings them will dramatically impact their designs. It seems that “He’ll has frozen over” and the artists must switch to making Ice Demons!

Eric Z and Kris decide to change their concept by switching their color palette to colder colors. Wayne and Eric F’s demon is from Russia anyway so they already have a cold version in mind. Team Redhead decides to make their demon’s teeth into icicles and add snow elements. Meagan wants to add two different snakes onto the body, maybe adding a “big cobra.” House sort of reluctantly agrees.

On Day Two, everyone realizes how much additional work comes with this added twist. Eric and Wayne say they are on track though, and won’t have to play it safe. Jenna’s hand feels a little bit better and this she is feeling more positive about her team’s design.

McKenzie returns with her dad Michael Westmore, who is back to act as a mentor to the artists after taking last week off. Yay! Michael loves the snake elements of Meagan and House’s design. He recommends that they vary the colors on the snake hood to give the creature’s look some depth. Westmore advises Team Redhead to modify the lips of their demon so they don’t look so prominent. For Eric and Wayne, he advises them to not let their animatronics get in the way of their paint job. Eric says that time management is one of his specialties so he is not worried. Famous last words.

Lion features and Dragon feet figure in the design of Kris and Eric Z. Westmore has lots of advice for them including articulating the way the shoulders move with the back. Anthony and Alam’s sculpt looks really good for their Hindu demon goddess with hooked teeth and four nostrils. Westmore warns them to make sure their foam mask is made a bit larger than they need to allow for shrinkage of the foam.

Pazuzu from Babylon is described by Autumn as having a man’s body with Dog-Lion facial features. Shading will make their design pop, says Westmore.

Jenna’s hand pain is back and Katie is worried that her inability to pull her weight will put them in the bottom. She’s obviously in a lot of pain but that doesn’t change anything. Jenna just tries to suck it up.

At the end of day two, Anthony feels nervous because he and Alam have not had time to cast the feet for their model. They have just four hours on Application Day and there is a lot of painting to do.

The models arrive and looks slowly come together. It seems that Eric and Wayne are a little bit behind after all and Team Redhead are having issues with their “walker” arm extensions. House and Megan are each approaching their creature’s paint job in very different ways, and that is costing them time.

Wayne and Eric will be painting their guy at Last Looks, which has been Wayne’s  problem in every challenge so far. At Last Looks there is just one hour for them to pull it together. This week, even more than previous weeks, it seems like many of the teams have more to do than usual.

Because if something can go wrong, it usually will in this game, Eric then accidentally disconnects the cable that will run the eye animatronics and, all of that work is for nothing.

Glenn, Ve and Neville are on their own as judges this week. McKenzie reveals this week’s “Hell Freezes Over” twist of making the artists turn their desert demons into ice demons. Here’s what everyone came up with: 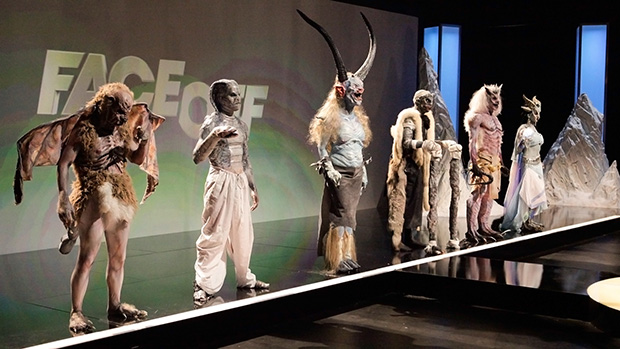 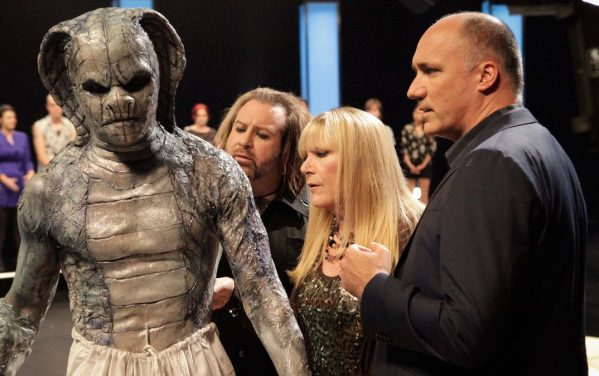 House and Meagan’s Azi Dahaka snake demon also looks so close to being good…but not quite. House is disappointed by the snake hand-extension , which really does just look like a hand puppet. 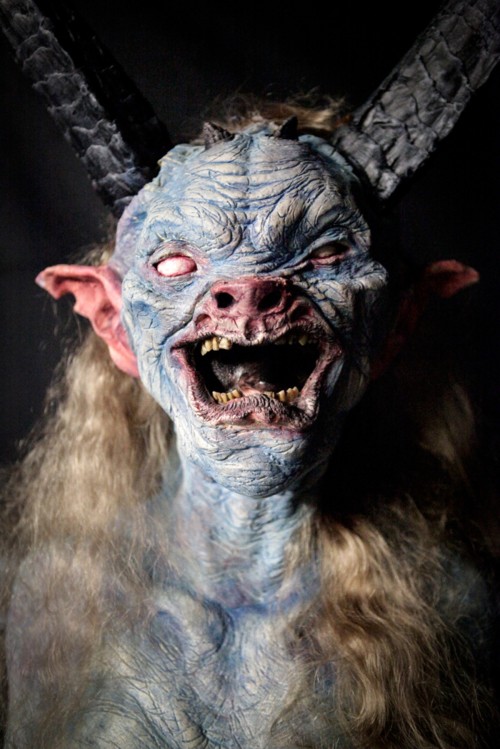 Chort by Wayne and Eric looks lacks detail due to the hurried paint job, but the three-foot horns and the head sculpt are impressive.

Euronome has a chewed up face and lacks any discernable detail as to what this demon is supposed to be. After their very detailed sketches and concepts Team Redhead really failed. Katie admits that it “looks like crap.”

Kris and Eric Zs Abraxas, I’m not sure how to feel about this. The body looks remarkably similar to Alex and Autumn’s creature. And the face looks like a dog goat. They are pleased though. 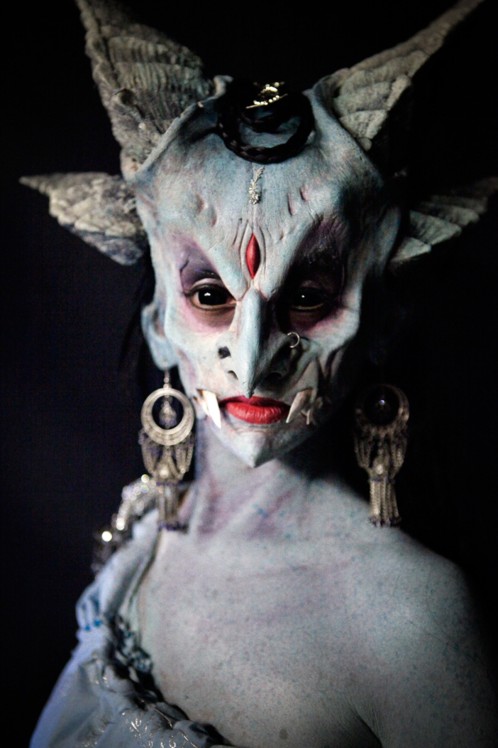 Anthony and Alam’s goddess demon, Deumus, is the top look of the night in my opinion, with great accents, details and the best paint job of the bunch. The turquoise paint really elevates it to a thing of beauty, which was their goal all along.

Meagan and House, and Kris and Eric Z, are safe and can head back to the make up room. Everyone else is the best and the worst and will now be cross-examined by the judges.

Anthony and Alam are up first to talk about Deumus. Glenn says that the themes that they were asked to present have been very successfully addressed in this creation. He calls it gorgeous and says that they got the cultural references right. Ve asks about their color choice and Anthony says that they had seen blue toned gods in Hindu paintings. Neville remarks on the delicate beauty detailing on what could have been traditional witch make up.

Alex and Autumn explain that Pazuzu is a demon that protects humans from other demons. Ve says that the face sculpt is “very, very rough” and looks like it was “carved out with a spoon.” Ouch! Neville says the bad anatomy in the wings makes him look broken and damaged. Glenn asked what they changed when McKenzie gave them the twist and Alex says that they changed the paint to make him paler and more sickly looking. Glenn says that a lot of what they did works from far away but there is no way you could put a camera on it in a close up. Ultimately Glenn gives the best comment of the night when he offers, “it punches you in the face with how bad it sucks.” 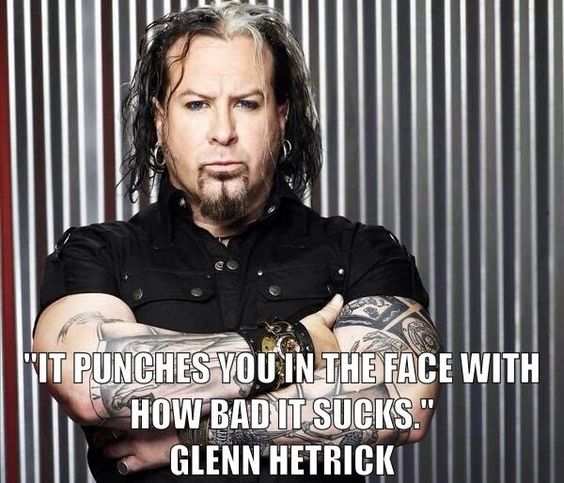 Wayne and Eric are next up to talk about their Russian demon called Chort. Eric explains that the animatronics did not work out to make the creatures eyes blink as planned. Neville likes the silhouette and says there are some nice big moments and beautiful pieces. Glenn also says that they made some good decisions; such as letting the model see through the mouth so they could extend the head. But he says you cannot wait until the final day to work on the paint job. Ve says they’ve presented some beautiful work over all.

Team Redhead explains that their Demon, Eurynome is covered in sores and feeds on dead bodies. When Glenn asks them how successful they feel they were they say in unison, “not at tall.” They cite time management issues and Jenna’s crippling hand pain. He’s a hot mess, everyone agrees. Ve says they could have fixed the bad sculpt with a good paint job. Neville just cites bad time management and choices that did not work.

Top teams are Anthony and Alam for the strong synthesis between the demon’s attributes and the region it is from. The judges knew a lot about it just from looking at it. Wayne and Eric are also praised for the work on their demon’s abdomen and for making the most “uniquely demon” creature of the night. Anthony and Alam win for everything they did working so well together, but there can be only one winner and that winner is… Anthony, taking the top spot for his work on the creature’s face and horns. This makes Anthony’s fourth win – impressive!

The bottom duo is team Redhead, with Katie – ironically – going home for the arm extensions and back piece she did being the worst aspects of their creation. Pretty unfortunate since an injured partner hindered her. That’s show biz!

The episode recaps of SyFy’s Face Off Season 4 were originally written for the Redesign Revolution website. As that site has gone offline, this article has been added into the historical archive of the Worley Gig for all of our readers to enjoy.