Isn’t it fun to discover that a band you loved for a brief period of time, maybe decades ago, is still together and recording songs that are pretty darn good? I love it when that happens. For example, we sure did go crazy go for the the British band James and their fun song, “Laid” (circa 1993, wow, such a long time ago) which was about having great sex at a time when sex was something we were enjoying quite a bit as well. “This Bed is on Fy-yah!” – Yeah, baby! And guess what? James is back with the official video for their new single “Dear John.” The stunning electro-ballad — which is about finding it hard to end relationships — is taken from the band’s current and critically acclaimed studio album titled Girl At The End Of The World, which is out now!

Directed by the award-winning animation director Péter Vácz, this beautiful, Tim Burton-esque video blends stop-motion with 2D and 3D animation to craft two deceptively real characters venturing into a mystical forest. James‘ front-man and chief lyricist, Tim Booth explains that the song was, inspired by the age of long term relationships being finished by a text. “A ‘Dear John letter’ was a letter a soldier received at the front from their loved one saying she’d finished with him,” he continues. “James have written songs that get played at weddings and funerals. Now we have made one for your divorce!”

“Dear John” premieres hot on the heels of James‘ storming set at Glastonbury, where the band officially opened the festival a couple of weekends ago, cutting a ribbon with Glastonbury founder Michael Eavis. Woo! Next up: The band will embark on a European festival tour, with dates in Spain, Greece and Portugal, and a co-headline slot at the OnBlackheath Festival in London on September 11th, 2016. Enjoy! 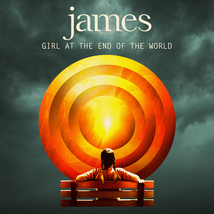