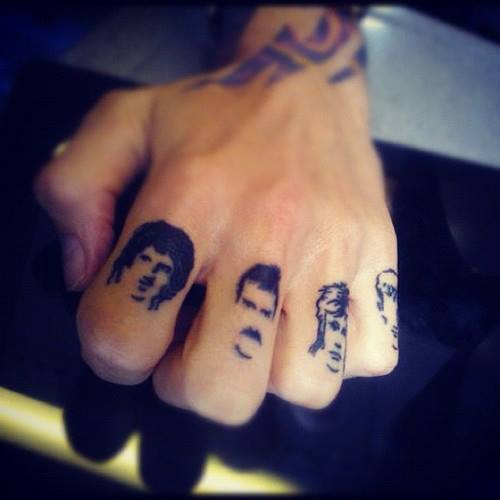 Look! Justin Hawkins of The Darkness had the faces of the members of Queen as seen on the cover of their gayest album, Hot Space, tattooed on his fingers! Now that is dedication. Also, why is John Deacon missing an eye?

Serving It Up Hot!

Can you believe it’s been seven years (seven years!) since British glam rock revivalists The Darkness released a new album? I can’t, because that means it’s been more than seven years since I had a brief but truly memorable phone conversation with legendary producer/ engineer Roy Thomas Baker. Baker was in the studio with The Darkness at the time, producing what would become their sophomore CD, One Way Ticket to Hell…and Back. The nut of that conversation was Baker turning down my request for an interview with Modern Drummer magazine regarding his groundbreaking work with numerous influential drummers. Despite a presumed awareness that Modern Drummer was neither Tape Op nor Mix, but a magazine about drummers and drumming, Baker told me straight up that he “couldn’t imagine why” he would even consider doing an interview for any magazine that wouldn’t put him on the cover.

My point here is how unsurprising it was that The Darkness – who were their own worst enemies in many ways – would choose to work with an egomaniac like Roy Thomas Baker. Because, for as ‘pretty good’ and legitimately interest-piquing as the groups’ debut, Permission to Land, was – and despite the fairly transparent tongue-in-cheekiness on the part of the band’s central mouthpiece, Justin Hawkins – no matter how great or godlike or heaven sent a band may think it is talent-wise, unless you are John Lennon, you should probably avoid talking about how your band is More Popular Than Jesus (or words to that effect). In almost every case, it’s going to backfire (see: sales and critical reception of One Way Ticket to Hell…and Back). As a general rule, it’s advisable to just shut the fuck up about your own perceived greatness and let the music do the talking. That way, if the music is indeed as great as the band says it is, your audience will do the taking, you will build a loyal fan base, and sell enough records / concert tickets to make a living. Win win!

None of that matters anymore though, because The Darkness has a new CD out called Hot Cakes that is so excellent, it wipes the slate clean of all past transgressions, real or perceived. It is obvious from the consistently high quality of the songwriting and the top-shelf musicianship going on all over Hot Cakes that The Darkness has not spent the past seven years jerking off (figuratively or otherwise), because the growth curve here is off the charts. Like many bands that dabble in the resurrection of a much-beloved but long gone rock genre, The Darkness are one of the most polarizing bands currently working. When I first received an advance of Hot Cakes and posted on FaceBook about how much I was digging it, comments on that post ranged from “I love their first album so much but couldn’t stand the second” to “their first album totally sucked, but their second one was fantastic.” So, your mileage may vary. But here’s 1,000 words about what I think.

Hot Cakes features the original lineup of singer Justin Hawkins, guitarist Dan Hawkins, bassist Frankie Poullain and drummer Ed Graham and was produced by the band, along with Nick Brine, and mixed by Bob Ezrin. Bob Fucking Ezrin! Perhaps the highest compliment I can pay to Hot Cakes is to confess that listening to these songs made me realize how really impotent and mediocre anything else that you could call “current” sounds in comparison. Completely deserving of the label All Killer No Filler, I love every song on this CD. Better yet, each song sounds more amazing with each successive listen! When was the last time you could say that? Me: not recently.

The disc launches on a high note, and never lets up, with “Every Inch of You” – Hawkin’s cheeky autobiographical anthem about his personal aspirations as they relate to the rise and fall and rise again of his band. “Every Inch of You” harnesses the best of The Darkness’s deep indebtedness to Queen and T Rex.

Just as Elton John released “I’m Still Standing” as a high-ground way of telling all his naysayers to get bent, The Darkness offer “Nothing’s Gonna Stop Us,” an ecstatic anthem featuring the most adhesive, razor-sharp garage rock riffs since The Hellacopters were actively recording. “With a Woman” channels AC/DC and Motorhead as fronted by Freddie Mercury, and you will certainly notice other winks and nods to AC/DC around the CD. All good! “Keep Me Hangin’ On” moves along on a thunderous, galloping beat that will remind those who were raised on 70s radio of the time when rock music was fun, crazy and truly magical. Rock Passion is alive on Hot Cakes!

Further on, as each track segues seamlessly into the next, the ballad “Living Each Day Blind” conjures what Coldplay might sound like if they had any nads. The first single, “Everybody Have A Good Time” has one of the best lines of the many not- insignificantly-poignant lyrics on the record: “Take off your thinking cap / and listen to your heart.” At its core, this is a thoughtfully crafted song about living in the now rather than dwelling on the past or pining for the future. Good advice, Darkness! If you dug the sound of Permission to Land, you will be won over by this song on its own.

“Forbidden Love” makes excellent use of an intoxicating Latin motif but still rocks hard enough to crack a skull, and Hot Cakes also includes a cover of Radiohead’s “Street Spirit (Fade Out),” which manages to stay faithful to the original while sounding heavier than the heaviest Iron Maiden song. Run to the Hills! My favorite, though, is “She’s Just a Girl Eddie,” an enthusiastic romp on which a guy consoles a brokenhearted friend by advising him to forget his fresh heartache and gear up for all the good things (i.e. more women) to come. I give this same advice to any of my girlfriends when they get dumped. He’s just a guy! Why waste your precious time on someone who doesn’t get how awesome you are? Fuck that noise and move on! I love this album! Ladies and Gentlemen, The Darkness is back!