I’ll tell you, what I like right away about this highly atmospheric video from Birmingham, Alabama’s Wray is the simple setting: just the band playing against a projection screening in a big, empty warehouse lit only by strobes and a few scattered light effects. I feel like I’m watching them perform at my own private rave!

The sound that this trio captures for the single “Relative” is the pure essence of ’80s arty post punk ala Wire Train and Bauhaus. I don’t think that there is higher praise to be given than that type of comparison at this time when mediocrity is feted and style is celebrated of substance every step of the way. Perhaps a bit of of the credit for Wray’s awesomeness is owed to engineer Daniel Farris (Man Or Astro-man?, St. Vincent, Polyphonic Spree, Verbena) but he certainly couldn’t add such a glorious sheen on top of a sound that wasn’t brilliant to begin with. 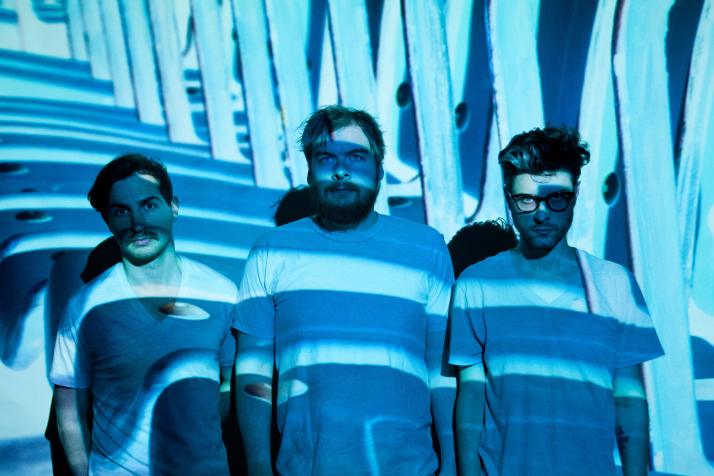 It’s CMJ week here in New York City and that means…well not much to me, actually. I’m bypassing the convention/panels/parties/endless-showcases-of-lame-bands -enjoying-their-five-seconds-of pre-fame this year in favor of attending just a few choice shows. Last night was my designated “Night of Rock,” despite the fact that my Quest for Rock Action meant I would miss the debut of Survivor: Guatemala. Sometimes we must make sacrifices in order to rock.

The first event on my evening’s agenda involved a pitstop at downtown hard rock landmark, Don Hill’s, where Munsey from Skateboard Marketing was holding his own version of a Metal Mania Party, featuring a performance by my favorite band of scary guys with facial hair, Fear Factory.

This is a picture of Fear Factory singer Burton Bell. He is my very favorite heavy metal front man at the moment. Though Burton is not traditionally “hot” in the pop star sense — being kind of scary looking on stage — he is nevertheless unbelievable sexy, outrageously charismatic and has the best voice for the kind of somewhat melodic aggro metal Fear Factory does. I also love his tattoos. Burt, like me, is an Aquarius and that is probably why we get along. We had Mexican food together once, but that is another story.

It was so crazy to see Fear Factory in a teeny tiny club like Don Hill’s because they play huge venues like Roseland these days, and that ‘s part of the reason their set was so mind blowing. They were so tight and so loud and so fucking metal. My ears still hurt. Have you heard their new CD, Transgression? It just rules; a perfect mix of eat-your-face-off aggressive metal and heavy melodic rock. They remind me what Nine Inch Nails could be if Trent had any balls and wasn’t completely self-absorbed. Before their set, I had the chance to talk to Raymond Herrera, FF’s drummer, who I’ve interviewed a couple of times for Modern Drummer Magazine. He is amazing and completely hilarious to talk to.

Munsey’s party was a total blast because I also met up with some of my metal scene friends who I had not seen since winter, or in some cases over year or more, such as Jon Paris and his wife Laurie, Liz Ciavarella, Felix Sebacious, Rachel Martinez and Steve Prue. It was rad.

Next I jetted over to the Continental for the Liquor and Poker label showcase featuring two of my favorite bands in the Universe,
Crash Kelly

and The Black Halos

And I will get to that part the evening soon, but now I have to catch a train…MORE LATER INVOLVING MUCH ROCKING, VERY CUTE ROCKER BOYS AND LOTS OF HUGGING AND SWEATINESS.