Two Words: Toy Robot! At a time when absolutely nothing original is happening in Music, NY based synth pop/rock quartet Jolly have miraculously delivered the most original DIY music video I’ve seen in 30 years! Created by the band themselves with only a cardboard box, construction paper and the aforementioned toy robot, “Lucky” is the fourth video from the album The Audio Guide To Happiness ll, out now on InsideOut Music. This crazy cool video features a cameo appearance by famed drummer Mike Portnoy (ex- (Dream Theater), who can be seen in the clip driving a Puppy Nursery van, and sporting his numerous tatts and blue beard. Mike Portnoy!

Sound-wise, Jolly lives up to its name with this upbeat, ridiculously melodic and hook-laden tune that for some reason reminds me of what Living Color might have sounded like if they had hit it big in the early ’80s. Also, tell me you don’t hear a little Faith No More in the mix, because I know you do. Furthermore: Lead Singer kind of Hot. Jolly is currently on tour in the US with plans to release new material in 2014. Find out more about Jolly and its very fun music at Jolly Band Dot Com. Enjoy! 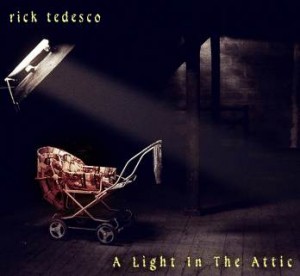 Aside from owning and operating one of Connecticut’s premier custom guitar shops, The Guitar Hangar, guitarist Rick Tedesco is probably best known for his work with recent Rock & Roll Hall of Fame inductee, Alice Cooper bassist Dennis Dunaway. When the Dennis Dunaway Project declined to finish recording its sophomore album, Tedesco took his songs, enlisting the assistance of some of his fellow Connecticut musicians, and recorded his first solo effort with A Light In The Attic. It was probably a good move on his part. Light is an album that should appeal to a lot of classic rock fans who dig heavy guitar rock with melodic sensibilities as heard in the music of bands like Dream Theater, Styx, Blue Oyster Cult and even some of the stronger hair metal bands of the late 80s, such as Winger. Where Tedesco’s project stands out over the previous Dennis Dunaway Project album (Bones From The Yard) is in its more consistent songwriting and thematic tone, elevated by Rick’s superior vocal talents. Far from sounding like just another home studio-recorded project, the production values on this album are extremely impressive!

The album kicks off with “Fireball” – a momentous tale of impending Armageddon, (actually penned by Dunaway), and the album doesn’t slack off for a moment through the remaining 11 tracks. Guest musicians on Light include Dunaway, contributing bass on several tracks, as well as former Dennis Dunaway Project members Ed Burns and Russ Wilson, guitarist Doug Wahlberg (The Doug Wahlberg Band), drummer Rich Genovese and the legendary Ian Hunter, a longtime friend of Tedesco’s, who plays organ on “The Night is Coming.” A couple of the standout tracks are the ones that pay homage to the Monster Ballads of the 80s, such as “Pain” and “Drowning,” which starts out sounding very similar to Led Zeppelin’s stunning “10 Years Gone” – and that’s high praise indeed. I also really enjoyed the album’s closing track “Church of Sinners” for its very fun James Bond-feel outtro.