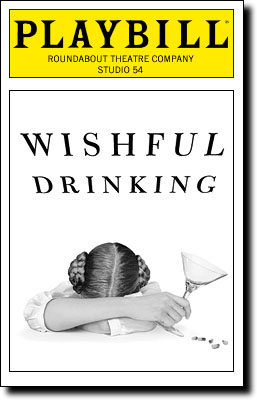 Even though I live right in the heart of hustling, bustling Manhattan, I do not tend to see a lot of Broadway shows, particularly since being made to suffer the tortures of the damned that is Spring Awakening. But when Geoffrey came back from having seen Carrie Fisher’s one woman show, Wishful Drinking, with non-stop rave reviews, I knew I had to check it out. Because Geoffrey knows his funny. Knowing that my BFF Sue would be in town visiting me from LA this past weekend, I purchased a couple of tickets for us to see Wishful Drinking on Saturday evening. (BTW Goldstar Events has tickets for selected show dates on sale for half price, so I recommend checking that site first before going to the box office/Ticketmaster). Needless to say, we were not disappointed.

In Wishful Drinking, Ms. Fisher, the actress best known to everyone as the iconic Princess Leia from Star Wars, candidly enthralls the audience with various excerpts from her recent autobiography of the same title. From the flow-chart-style examination of her convoluted “celebrity” family tree (her parents are actress Debbie Reynolds and singer Eddie Fisher) to her “behind the scenes” tidbits about working with director George Lucas on Star Wars, to her marriages, bouts with drug rehab and ongoing treatment for Bipolar Disorder, Carrie takes a brutally frank approach to peeling back the layers of her darkly comic and extremely fascinating life. Mental illness was never so hilarious! Sue and I completely fell in love with Carrie while laughing our asses off. Immediately after the show ended, we ran around to the back of the theater and hovered briefly by the stage door, from which Carrie soon exited and cheerfully signed our Playbills! Yay for souvenirs! Trust me, even if you think Star Wars blows, this is one Broadway show you will not want to miss if at all humanly possible, because Carrie Fisher is awesome.