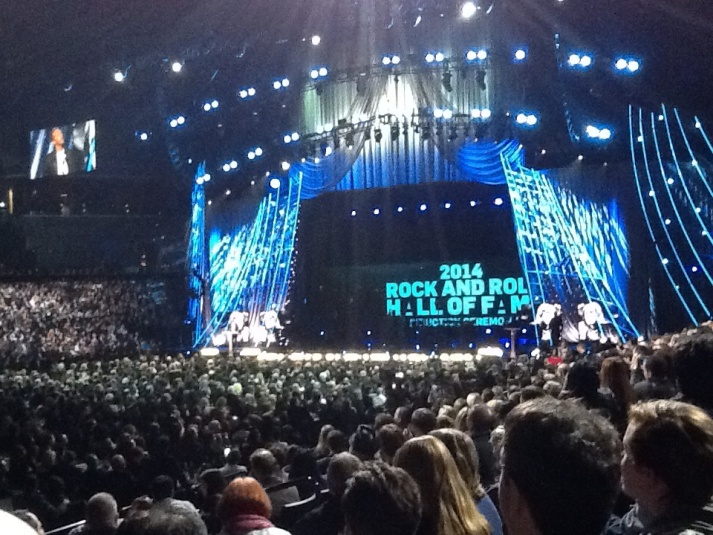 The Class of 2014 entered the Rock and Roll Hall of Fame last night and it was an evening full of magical moments, even for jaded, old-school, Rock Curmudgeon like me. The show went on for over 5 hours – and 90 minutes of that was just the E Street Band members giving their individual ‘Thank You’ speeches! A televised version of the ceremony will air on HBO on May 31st and I’m guessing that, to get it edited down to two hours, they’ll cut out all of the juiciest parts (Courtney Love being booed in front of her dead husband’s family, that was painful to experience). But I got see it all from a comfy seat in the Barclay’s Center. Here are a few moments that stand out.

Listed in the order they occurred:

That Peter Gabriel introductory montage was something else. He’s always been a musical genius (Six Words: The Lamb Lies Down on Broadway), but the reminder of how much he’s done in his career was almost jarring. Because, wow. Peter Gabriel is awesome.

Chris Martin’s Induction speech for Gabriel was absolutely hilarious and man, does Martin look happy to be getting divorced.

After talking non-stop shit about each other in press for the past few months (it seems) all four original members of Kiss managed to not be total dicks to each other while accepting their awards (they were the only band to not have any kind of associated performance). I know that Gene thinks that Peter and Ace have no business being inducted along with him and Paul, but if he doesn’t understand that without those two that band would be residing in Nowheresville, he needs to pull his huge, ego-swollen head out of his ass.

I am pretty sure I had seen printed reports that Yusef Islam (FKA Cat Stevens) would not be appearing at the event, so no one was more blown away than me when he not only showed up, looking and sounding great, but also performed three of his classic songs including – wait for it – “Wild World” and “Peace Train”! Holy Effing Ess, “Peace Train.” I can’t even think about that song without losing my shit, so imagine what it was like to hear CAT FUCKING STEVENS perform it flawlessly, live in front of thousands of people. That’s a once-in-a-lifetime moment that you’ll never see again. I still can’t believe it happened, and I was there!

This out of chronological order, but it was so great to see Art Garfunkel induct Stevens. I love that guy.

Linda Ronstadt is an artist whose music I grew up loving back when AM Radio was a thing you listened to. Ronstadt is now retired and no longer travels due to symptoms of Parkinson’s Disease, but many talented ladies of rock were there to pay her tribute including Bonnie Raitt, Emmy Lou Harris, Stevie Nicks and Sheryl Crow. Carrie Underwood also performed a stunning version of “Different Drum” (written by Mike Nesmith of The Monkees. Way.) that knocked my socks off. She may have the stage presence of a shoe, but her voice has gotten completely insane since she won American Idol.

I was charmed by Bruce Springsteen’s Induction speech for his longtime musical companions, The E Street Band. They seem like a great family of musicians. Also, Max Weinberg is hot. Also, thank you E Street Band acceptance speeches for providing an excellent opportunity for me to make a much-needed trip to the Ladies Room.

My fondness for the music of Hall and Oates is pretty much restricted to “War Baby Son of Zorro” and, if forced to cite a more recent title, “Method of Modern Love,” on which I enjoy the part where Daryl Hall spells the song’s title. The thing is, despite the fact that songs like “Maneater” and “Sara Smile” serve as very, very effective emetic, their band is one of the tightest live bands I’ve ever seen, and Daryl Hall still ranks among the best voices in rock. I really enjoyed their performance.

I can’t even remember who said in their speech that the “Greatest pop song ever written was Beethoven’s 9th,” but that person was 100% correct.

Nirvana’s Induction started at 11:45 PM, but it was so worth waiting for, not only to see Joan Jett front the band for “Smells Like Teen Spirit” and the surprise performance of “All Apologies” as sung by teen singing sensation, Lorde, but also to hear David Grohl drop the F-Bomb at least four times. He is my new Hero.

Congratulations go out to Michael Bruce, Neal Smith, Alice Cooper and Dennis Dunaway on their induction into the Rock & Roll Hall of Fame last evening, March 14, 2011, which took place here in NYC at the Waldorf Astoria Hotel. Alice Cooper was a band, no matter what any historical revisionist wants to tell you these days. The ceremony and performances will air on the FUSE network this coming Sunday, March 20th at 9 PM Eastern /8 PM Central. Check your local listings for the correct channel to tune to in your area.