Fans of Japanese Anime, Manga and the Superflat school of Pop Art founded by Takashi Murakami won’t want to miss Jessica Lichtenstein’s latest collection, Afterglow, on exhibit now at Gallery nine5 in Soho. Afterglow is the third solo exhibit by the artist at the gallery.

It’s worth noting that when I first saw photos of Jessica’s work, I assumed I was looking at Asian Landscapes depicting flowering trees. But it only took a cursory look once we were in the gallery to notice that the abundant “blossoms” clustered around the tree branches are actually tiny naked ladies! 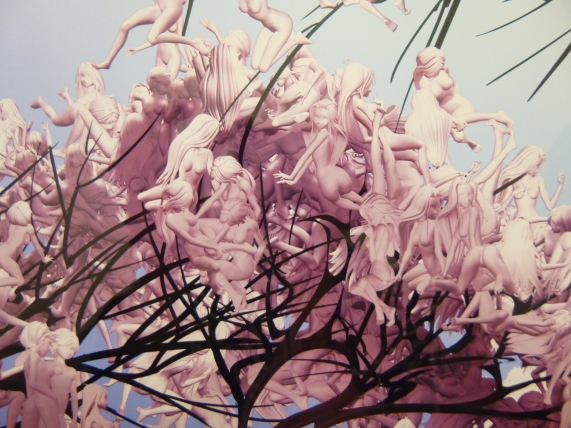 Known for her large acrylic word sculptures that serve as a playground for frolicking female figures, Lichtenstein  juxtaposes these works with new sculptures that present a contemplative environment for her signature, lascivious heroines. While still examining facets of femininity and fetishism, Afterglow offers an emotional lens through which to examine relationships. According to the show’s press release, the current exhibit at  nine5, “manifests sexuality in a delicate and sensitive way and thus invites the viewer to bask in the ‘afterglow’ of desire.” I would agree with that sentiment, as the show seems more sensual than sexual, and it is also full of humor and playfulness. 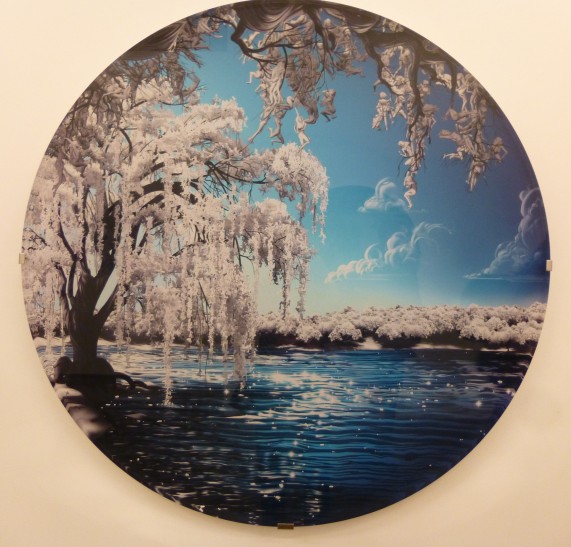 Afterglow features four circular sculptures of the Seasons series that are inspired by nature as a metaphor for the cycle of relationships – pink blossoms bursting from the trees in Spring, or the iced over world of Winter (both pictured above). These works also highlight the tension between the individual vs. the collective. Each girl is poised in a different position and is reacting to the environment, however together the figures unite in a singular image of a tree and its leaves, thus describing the collective strength of women regardless of differences in emotions and reactions.

Alongside the Seasons are Lichtenstein’s word sculptures, which, again in text taken from the Press Release, “toy with the pornographic world of Japanese-inspired comic books. Creating her own imagined fantastical landscapes infused with a highly sexualized environment, Lichtenstein places appropriated heroines in scenes that are reminiscent of Renoir’s, Cezanne’s or Picasso’s “nude bathers”; scenes that harken back to a time of “female as muse.” The works, layered behind a thick buffer of acrylic, take a critical distance from their own content and in fact, beg the viewer to do the same.

Through this intermediary, the viewer is asked to engage with and question whether Lichtenstein’s characters are depicted solely to satisfy an insatiable male-dominated gaze, or if such a theory is too narrow, neglecting to address the complex nature of women and their agency in terms of sexuality and desirability. To me, it seems much less complicated. I just think her artwork is lovely and fun.

Ultimately, you can interpret Jessica Lichtenstein’s works as having a deep socio-sexual resonance, or you can appreciate them as gorgeous, lighthearted and colorful works of Contemporary / Pop Art that also challenge you to think while you look at them. 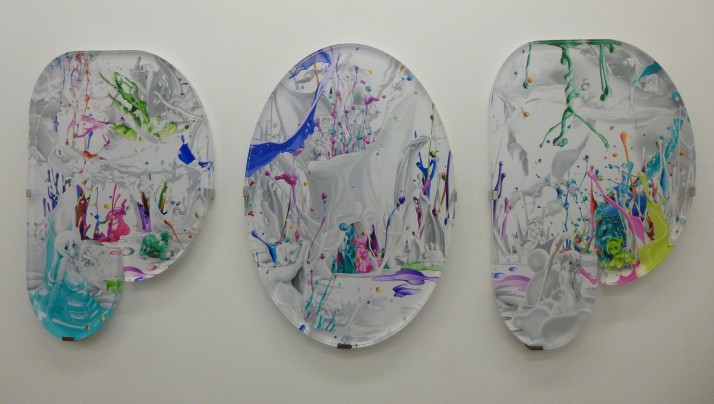 Afterglow by Jessica Lichtenstein will be on Exhibit through December 15, 2013 at Gallery nine5, Located at 24 Spring Street, New York, NY 10012.