It was a few weeks ago now, back on November 11, 2011, that I had my first in person experience with Italian-born artist Maurizio Cattelan’s most unusual retrospective exhibit, All, when I visited the Guggenheim that Friday evening for a live performance by the very excellent pop band, MGMT. The band performed a tight, 45 minutes set of mostly instrumental new material specifically inspired by the 128 separate works now suspended from the ceiling oculus of the museum’s rotunda. The songs fell very much within the surf-psychedelia vein of MGMT’s well-loved sound with a bit of a soundtrack vibe befitting the evening’s experiencing in general. Also, gee whiz, but what a spectacularly hallucination-inducing light show they had! I’m still having flashbacks. Music! Art!

The following week I had to pay another visit to the museum to take in All once again, because when I was there for the MGMT show I had a beer in my hand and the Art Nazis (guards) wouldn’t let me go up past the second ramp with a beer. And you really do need to trek all the way to the top of the ramp to fully experience the innumerable subtle nuances of this exhibit, which literally reveals itself further and further at every turn. The time lapse video above shows the installation process by the museum staff, which will answer your most pressing questions about “just how they got that stuff up there.” See it while you can.

Maurizio Cattelan’s All is on Exhibit until January 22, 2012 at the Guggenheim, Located at Fifth Avenue and 89th Street. Museum hours are extended to 7:45 PM on Monday and Tuesday nights (from 5:45 PM on other days) from December 6, 2011 to January 17, 2012. More information is available at This Link. 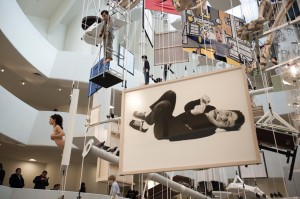 One thought on “Maurizio Cattelan’s All Retrospective at the Guggenheim”