The Gagosian Gallery chose an empty storefront at the the southeast corner or Fifth Avenue and 43rd Street for a Pop Up exhibit by Swiss artist Urs Fisher. The ad hoc gallery space contained exactly one work of art, a life-size Aluminum Rhinoceros entitled Things, whose form is adorned with an array of familiar, functional objects, ranging from a toilet to a handbag. The objects are either imbedded in the hide of the great beast, or they seem to float on its surface, as if attracted by a magnetic force. I went to check out Things on the penultimate day of its exhibition, which happened to be after work on a Friday.

Here’s some background on Things, and its meaning, from the Gagosian website:

“Amid the bustle of midtown Manhattan, a rhinoceros can be glimpsed through tall, arched windows at street level. Various man-made objects — including a copy machine, a car door, a handbag, a vacuum cleaner, a shovel, and a table — seem to float right through the creature, as if released from Earth’s gravitational pull.

Carved out of aluminum, this barrage of incongruous items forms a single, continuous unit, anchored by the rhinoceros, which stands its ground. Produced at life size from a 3D scan of a taxidermy animal, its furrowed visage looms from a height of more than ten feet.

Things considers the ways that objects and forces — from plastic bottles and Wi-Fi signals to memories, history, and emotion — gather around and pass through our bodies as we move through the world, creating countless versions of reality that are specific to each of us. 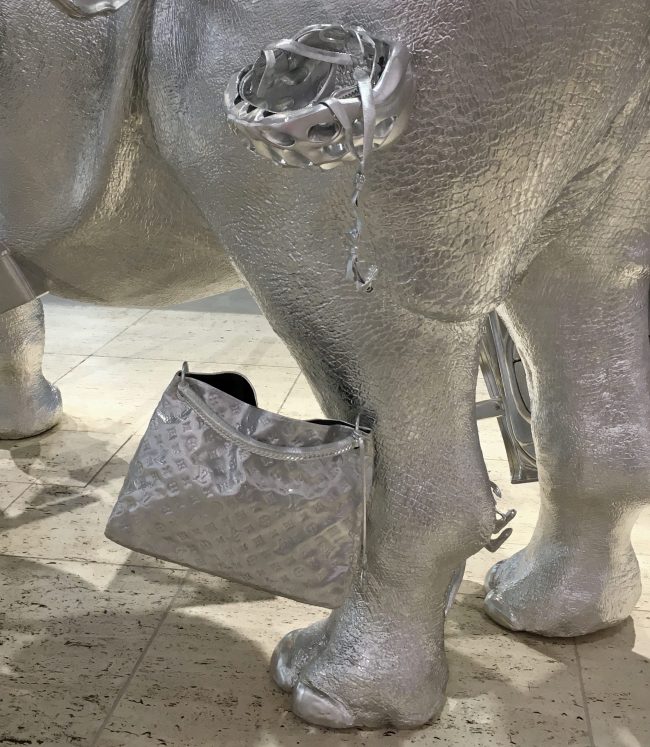 Like the rhinoceros, we absorb all that comes into our vicinity, and in the process we ourselves undergo a constant, often undetectable metamorphosis. Existence itself is thus presented as an accumulation, a collective gathering of physical and metaphorical baggage.

In his use of traditional materials and current technologies, Urs Fischer’s art tests the boundaries of possibility and perception. He has used clay, steel, wax, bread, dirt, vegetables, and fruit, among other substances, often to extreme paradoxical visual effect, revealing a keen attunement to the infinite mutability of image and form. The vicissitudes of objecthood are further complicated when Fischer’s sculptures are installed outside of the typical white-walled gallery.

In a courtyard, a vacated bank, an open field, his extroverted works have acted as portals into the uncanny. Here, the portal opens right between Grand Central Terminal and Bryant Park. An extraordinary creature made up of ordinary parts, Things transports unsuspecting passersby, if just for a moment, into a world that is at once prehistoric, digital, and mysteriously uncharted. 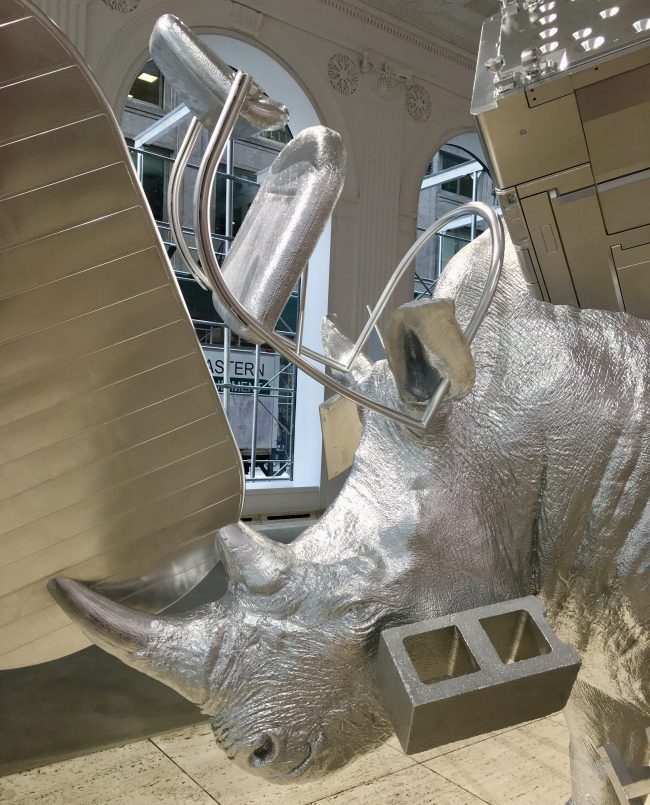 Things was produced in a series of three identical pieces, and all three have been sold to private collectors.

One thought on “Urs Fischer, Things at Gagosian Gallery Pop Up Space”