Storytelling is an ancient, ceremonial ritual: a vital way of passing down history and information that has become all but forgotten in this hyper–distilled, digital age. San Francisco-based artist Jeremy Fish has reclaimed the art of storytelling in his new exhibit, Listen and Learn, in which Fish’s paintings illustrate the telling of a brief but unique story told by one of his personal acquaintances. A digital recording of that interview is included as part of each colorful and detailed canvas, and while you examine the various images that make up the “big picture,” you get to hear the story behind the visuals in front of you. It’s an extremely unique and rewarding experience. This exhibit reminded me very much of the Stephanie Lempert’s recent Reconstructed Reliquaries exhibit (at the Claire Oliver Gallery) in which the artist built objects from the actual words of her interview subject’s stories. It’s exciting that artists are finding ways in which to add new dimensions to their work and I must say that Jeremy Fish’s unbelievably creative and extensive exhibit at Joshua Liner showcases some of the most unique artwork I have seen in recent memory. The show is a must see, for sure.

“The Last Viking” As Told By Courtney Taylor

While I attended the opening reception this past Thursday, the gallery was so packed with art fans that I knew I’d have to go back another day and spend extra time listening to the stories that accompanied each individual painting to really fully appreciate all that this exhibit has to offer. I visited the gallery again today (Saturday) and spent about an hour walking from painting to painting, sitting myself down in front of each canvas and hitting play on the tiny MP3 device so I could listen to tales from many colorful characters, ranging from Snoop Dogg to Courtney Taylor of the Dandy Warhol’s, who recount their personal memories of sexually deviant misbehavior at school, and having a tour manager that was more of a secret Rock ‘n Roll Viking, respectively. The stories told are alternately hilarious, far out, frightening, touching, drug addled, or just plain confusing. The unifying factor is that they are compelling stories in nearly every case, and the images that Fish creates to tell these stories are almost alive and breathing. 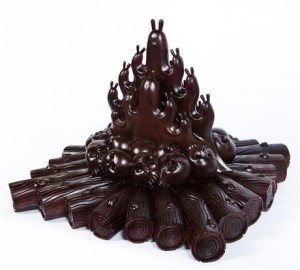 It’s unusual that the Liner gallery will devote both its front and back rooms to one artist, but in this case the collection is so extensive that Fish gets the entire space. Many of the paintings that fill the front gallery also have sculptural properties in that the canvases are shaped like the object that’s the main topic of the conversation, such as a subway train or hand grenade etc. The smaller, rear gallery is carpeted with lush Astroturf and the walls have been painted to resemble a cartoon forest in which the paintings interact with the background. In the center of that room you’ll find a cluster of whimsical wooden sculptures that add a very cheerful and fun aspect to the exhibit overall. Some of the paintings in the back room have accompanying audio and some do not, so your ears get a tiny break. Ultimately, however, curiosity is going to get the best of you and you’re probably going to end up listening to the audio at every single station. I know I did. 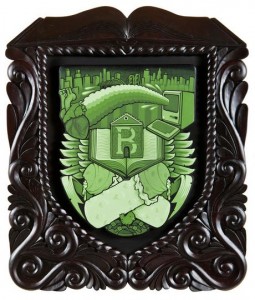 “Books For Burritos” As Told By Aaron Durand

One small downside is that, unfortunately not all of the audio works as it should. I was having trouble getting a lot of the stories to play, and when I asked for assistance from a very accommodating gallery worker, I was told to hold the play button down until I could hear the audio “pop,” then press play. This worked in most cases although there were a handful of stations where the story seemed to get interrupted, or end before the speaker was actually done telling the story. Other problems with the audio included excessive background noise or interview subjects who were too intoxicated to speak intelligibly, which of course had nothing to do with any technical difficulties. For the most part however the stories are clearly audible and easy to understand. A few of them didn’t really grab me, but so many are utterly fascinating and really add so much to the visual experience of the art. For example Kimya Dawson of the band Moldy Peaches tells an enthusiastic though somewhat meandering story about a teenage crush who shows up in her life years later, and ends up as a meaningful FaceBook reunion. It’s a situation that I’m sure a lot of us have experienced, but Kimya really takes it to the next level. If you’ve ever seen her appearances on the Storytelling program, The Moth, you know she’s an amazing storyteller anyway, so it was really great that Jeremy included her in this project.

I also very much enjoyed Jimmy Scheine’s contribution to the canvas called “Angry Work,” which tells the little known backstory of a series of Keith Haring paintings that have characteristics unlike any of his other artwork. Ron English, one of my favorite contemporary pop artists, tells a hilarious and unpredictably bizarre tale about hanging one of his renegade billboards over a busy highway that eventually leads to a multiple car pileup. Another favorite is artist Alex Pardee’s recollection of a comedy of errors leading up to his first art exhibit that includes a breakdown on the highway, a forgotten cell phone, a ticket for littering, a hillbilly tow truck driver and a woefully malfunctioning toilet, that just keeps getting crazier as it goes along.

In case you’re not quite convinced that you need to see this exhibit, you can visit This Link at the Gallery’s website to view selected works and hear samples of the accompanying recorded stories. There’s also a teaser video on YouTube at This Link which will give you an idea of how the storyteller’s words create the various seemingly disparate images of the painting.

Jeremy Fish’s Listen and Learn is on exhibit through July 16, 2011 at the Joshua Liner Gallery, located at 548 W. 28th St., Third floor, New York City. Gallery hours are Tuesday through Saturday, 11 AM to 6 PM.

Even if you’re a jaded art scenester who thinks he’s seen every kind of art on the planet, I’d venture a guess that you’ve not seen anything like the sculptures of Stephanie Lempert that make up Reconstructed Reliquaries; the latest exhibit at Claire Oliver Gallery in Chelsea. For Reconstructed Reliquaries, Lempert interviewed close to 100 people from all walks of life, exploring the rationale behind the reasons certain memories stay with us and why we form attachments to particular objects. Lempert has created a truly unique way to explore the intertwined nature of cherished mementos and the childhood reminiscences that make them precious. The Artist consolidates the narratives held in the memory of the storytellers and connects them to a single inanimate object that they hold dear. Known primarily as a photographer and video artist, Lempert takes the next logical step in her studio practice by incorporating three-dimensional works to consolidate her concepts.

The artist realized the sculptures for Reconstructed Reliquaries by adding on thin layer by thin layer of nylon-based plastic, creating a work of art that is only recently technologically possible. Using a three-dimensional stereoscopic printing process, Selective Laser Sintering (SLS), Lempert uses the actual handwriting of the storytellers to create the sculpture itself; the subjects’ own words make their memories tangible objects. Infusing these icons with human emotions, Lempert weaves stories, literally and figuratively reconstructing memories in such a way as to create a repository for the next generation’s hopes and dreams; the sculpture she has created becomes the touchstones of the very words they embrace.

Reconstructed Reliquaries consists of fifteen sculptures including a kitchen knife, a birdcage, chess board, globe and a plush bunny, among others. The full scale chess board tells the story of a man who, as a little boy, spent summers with his beloved grandfather. The grandfather taught him to play chess and, year by year, the boy grew in his abilities until the day he could beat his grandfather at the game. It was a very proud day for both of them. Another sculpture, a size 8 stiletto pump, tells the story of a little girl looking up at her beautiful mother getting ready to go out to a party. The child could not wait for the day that she herself would be allowed to wear such amazing shoes; they would make her graceful, sexy, statuesque and so powerful.

I imagine anyone would have a very personal experience looking at these beautiful objects and wondering about the life of the person whose words and memories helped to create them. Do make a point to see Reconstructed Reliquaries before it closes on May 7, 2011.