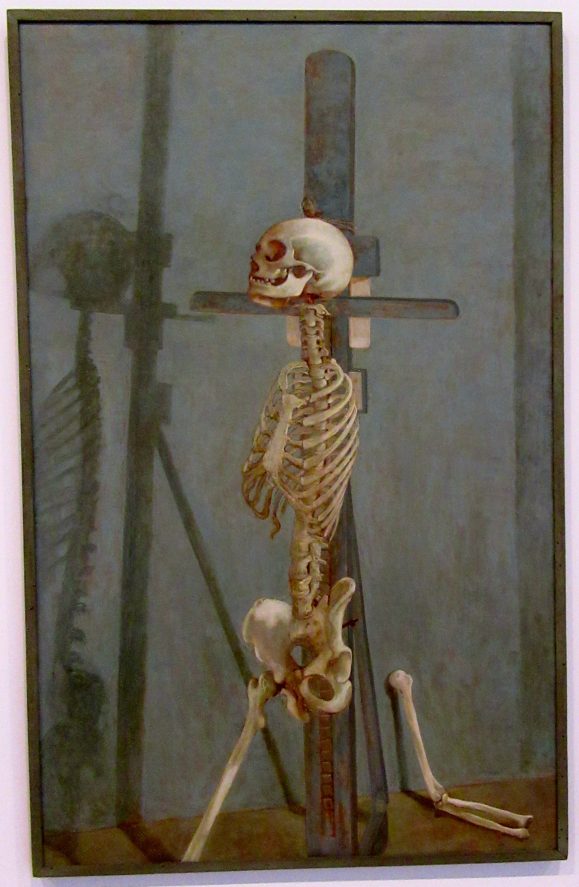 Stephen Greene (September 19, 1917 – November 18, 1999) was an American artist known for his abstract paintings and, in the 1940s, his social realist figure paintings.  Greene studied with Philip Guston with whom he remained friends until Guston’s death in 1980. During his career, Greene taught at Princeton University, where he was teacher to many well-known figures in the art world including Frank Stella and art critic / historian Michael Fried. In honor of this being Halloween, I wanted to find an appropriately-themed work of art, and I think that Greene’s painting, The Shadow (1950), suits perfectly.

Below is an excerpt from an in-depth interview with Greene conducted by Dorothy Seckler on June 8, 1968, found Here, in which he describes his state of mind at the time of painting The Shadow, and reveals his feelings about the painting:

“In Europe I just sort of went crazy. I didn’t sleep much. I wander around till 5 o’clock in the morning. I had worked very hard to become a painter and to show. I suddenly found myself in a foreign place. And I bought canvas there and it was the wrong canvas and the paint went through. Everything seemed to go wrong. I had sort of loss of nerve. And so when I got a little better, the doctor asked me if I would prefer to go home rather than staying there. Well then I came home. I had taken leave from my job. So I had no job. The Gallery gave me around $150 a month for 2 or 3 months: no, it was a little more than that. But in a very scary way. The Whitney bought The Burial just about that time. And the Gallery was so peculiar about giving me the money sometimes I’d have to call 4 or 5 times for the check. And I needed it. I didn’t live sensibly enough so I could live on $150 a month. So I finally said give me $100 a month. I tried to teach privately. And then I got a one-day job back at Parsons. And I think that psychologically I had undergone a very bad experience. And so suddenly from someone who had been known I became unknown. It was like everything I had sort of worked for for a long time was rather difficult. I was very depressed. And so I had to start off like an invalid almost. I’d put something in front and almost trace it, fill it in. I wasn’t sure whether I’d ever be able to paint. So I painted this picture. It’s called The Shadow.

It’s a setup. But it’s a very simple form easel with an actual skeleton on it, and a bone on the floor and then the shadow of the skeleton on the thing. And in retrospect I certainly am not very happy about it. You know, it’s very morbid and I think subject matter can be murderous because no painting is worth anything unless it’s formally exciting in some kind of very different way. So I think this is just some sort of – you see when anything gets so straightly autobiographical and not much else, no matter what anybody else might see, I just don’t like the picture. That is never with me, too. And I find it’s just a curio out of my existence.”

Photographed in the Whitey Museum of American Art in NYC.