The Birth Machine Baby sculpture pictured above was photographed by me in the Last Rites Gallery in Manhattan, which has a number original HR Giger pieces on display. Giger, who passed away in 2014 at the age of 74, is perhaps best known in popular culture as the designer of the Alien creatures in the film franchise of the same name, or, if you are a bit older, the designer of the cover of Emerson, Lake and Palmer’s 1973 epic prog rock masterpiece, Brain Salad Surgery. But his career was about so much more than that.

The limited edition Bullet Baby sculptures (30 in Bronze, 30 in Aluminum) sit inside the shell of a 9mm Luger Casing: the bottom surface of the sculpture is finished to look like a real bullet and is marked ‘9mm Giger,’ along with the artist signature and the edition number.

The inspiration for the Bullet Babies is the 1967, pen and ink Giger artwork, Birth Machine, a cut-away image of a fully loaded Walther pistol, in which the bullets are these crouching mechanical-looking babies. 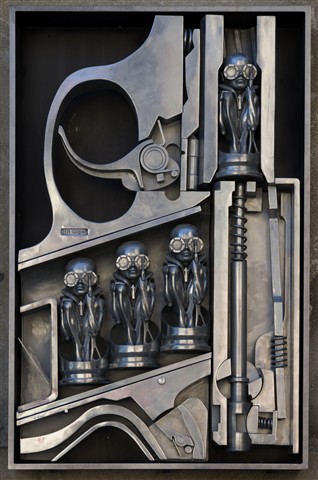 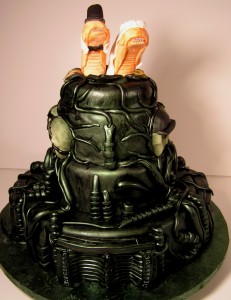 “I Now Pronounce You Alien and Host”

A half a dozen years after Swiss surrealist HR Giger designed the cover art for Emerson Lake & Palmer’s 1973 prog rock opus, Brain Salad Surgery, he increased his profile greatly with a little gig designing the title creatures for a sci-fi flick called Alien. Now, the chest-burster Aliens from that film’s pivotal early scene meet delicious pastry in the form of the HR Giger-inspired Wedding Cake. The picture above really says it all: a brilliant creation, and it’s probably delicious as well!

Thanks to Neatorama for the Tip!

Emerson With One of His ‘70s-era Moog Synthesizers

Keith Emerson, keyboardist for prog-rock legends, Emerson, Lake & Palmer was born on this day, November 2nd in 1944! Brain Salad Surgery is still one of my favorite albums of all time! Happy Birthday Keith!