The Image Above Courtesy of the Jonathan LeVine Gallery. All Other Photos by Gail Worley

Worley Gig has taken a bit of a break from Gallery hopping this summer: partly because lots of the galleries are on their summer hiatus and partly because we’ve just been too busy doing other fun things. Oh, New York Contemporary Art Scene, how we have missed you. But what better way to get re-immersed in the vibrant Chelsea gallery scene than with Jonathan LeVine Gallery’s latest group show, Détournement: Signs of the Times, brilliantly curated by Carlo McCormick, which opened this past Thursday. We’d especially like to thank the gallery’s Associate Director, Malena Seldin for allowing The Gig to photograph the show in the empty gallery prior to the start of Thursday night’s opening reception. 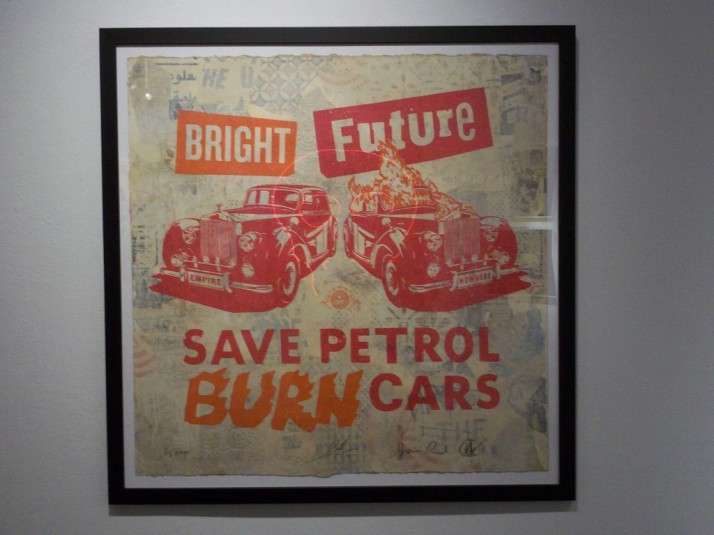 Bright Future By Shepard Fairey in collaboration with Jamie Reid

Much like Opera Gallery’s Streets of The World group show this past May, Détournement features the work of many of the most famous contemporary pop and street artists currently working, including:

Carlo McCormick offers the following statement about the show:

A détournement is a detour of sorts, but not so much along the scenic route as over the tougher road that goes more directly to the truth. A more proximate translation from the French might be a derailment, but I’m not sure English is so well suited to get both the violence and hilarity of the term. Since coined by the Lettrist International in the 1950s, it has served various generations as a common strategy by which to subvert consensus visual language so as to turn the expressions of capitalist culture against themselves. The most typical folkloric version we encounter of a détournement is when someone writes a word at the bottom of a stop sign, so that with say just three letters this mundane road command might read “Stop War.”

Traffic Signs for the Hearing Impaired By Martin Wong (estate)

The idea of an artist co-opting a popular commercial slogan or iconic symbol is not new, but it is done here in ways that create a visceral reaction in the viewer and encourage imaginative extrapolation and discourse. Not to mention, but you can see I am about to, the fact that this show just makes a gorgeous visual presentation. A few of my favorite images are Dan Witz’s series of “Do Not Enter” signs, which range from whimsical to horrifying.

Man of Sorrows By Dan Witz

Peter (Hanging) – collaboration with Till Krautkraemer, By Dan Witz

Ron English also gets one entire wall of the rear gallery dedicated to his mural comprised of a series of darkly satirical grocery store flyers, accompanied by one of his popular reoccurring characters, the sexually anthropomorphized cow: 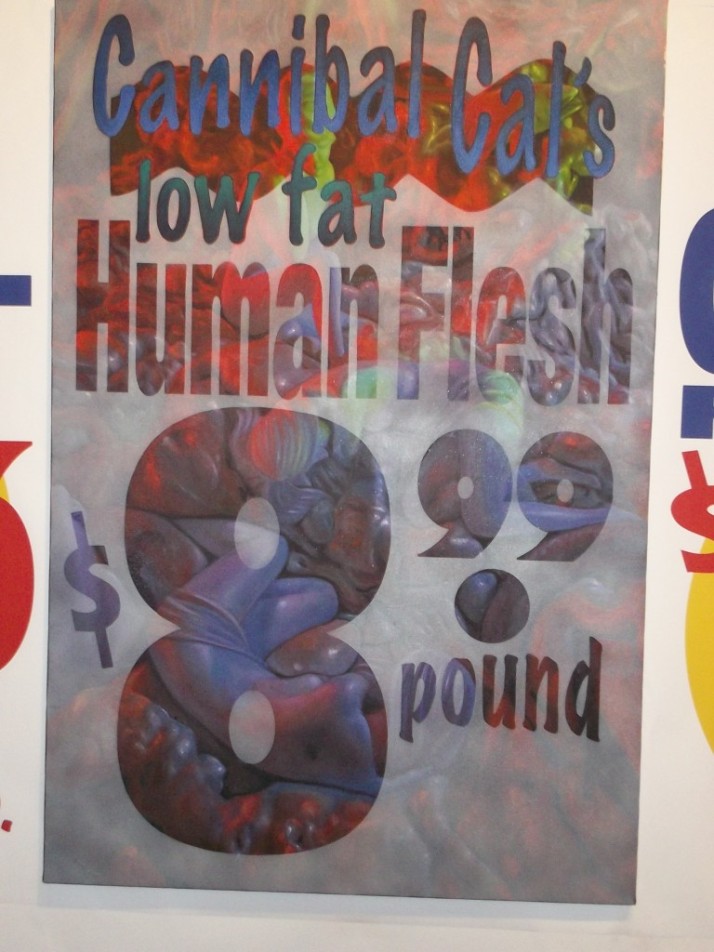 Of course, two of our favorite brands, Coca Cola and Apple, do not escape unscathed:

If you’re outside the tri-state area you can view the works of Detournement online and read more about the exhibit and participating artists at This Link. Otherwise, make a trip to see the show in person before it closes at the end of this month.

See More Photos from this Exhibit After the Jump!

Detournement: Signs of the Times will be on exhibit through August 25, 2012 only at Jonathan LeVine Gallery, Located at 529 West 20th Street (West of 10th Avenue), 9th Floor in Chelsea, NYC. Hours are Tuesday through Saturday, 11 AM to 6 PM.

Self Snitch By Posterboy