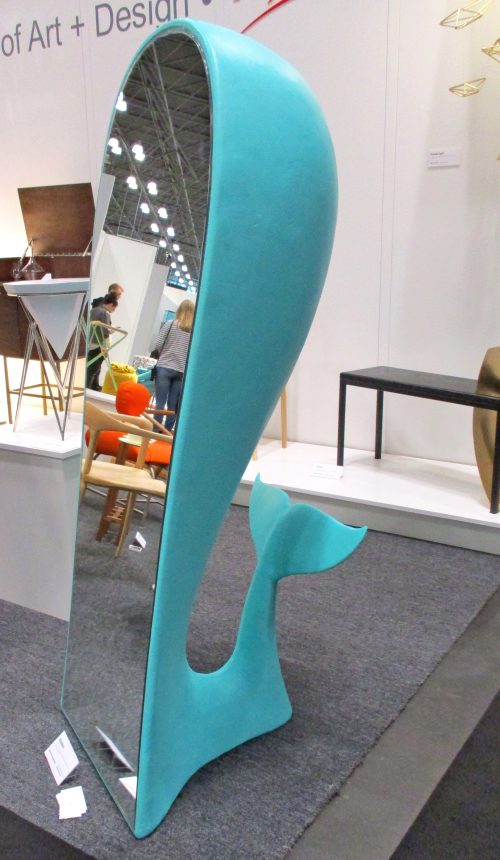 Walden By Malorie Pangilinan (All Photos By Gail)

New Jersey Institute of Technology (NJIT) design student Malorie Pangilinan created this Whale-shaped mirror, taking her inspiration from Kawaii; the quality of cuteness in the context of Japanese culture.

It sure is cute!

Photographed in May 2016 at the ICFF Trade Show at Javits Center in NYC. 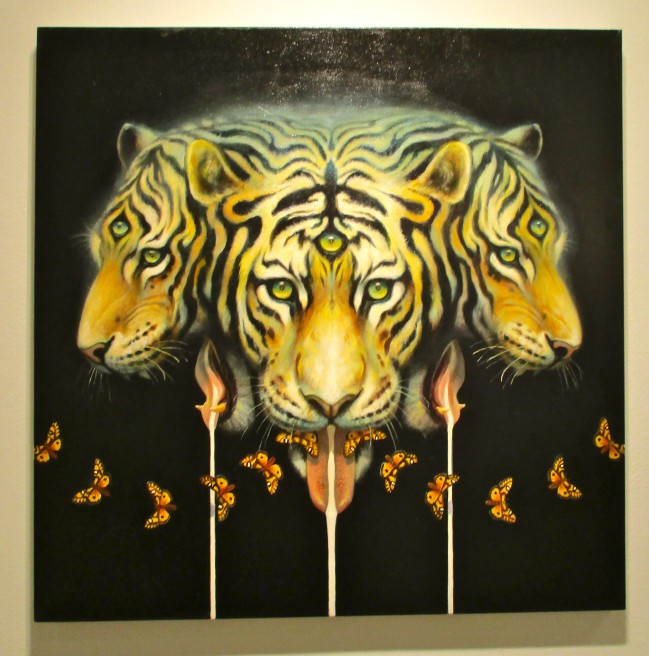 Mother’s Milk By Martin Wittfooth (All Photos By Gail)

Putting a surrealist, almost sci-fi spin on the paintings of American ornithologist John Audubon, and recalling his contemporary Josh Keyes‘ “after man” images of animals running amok in a modern society that is strangely absent of all human life, artist Martin Wittfooth delivers Offering, his first solo exhibition at the Jonathan LeVine Gallery. After being fascinated by Martin’s work for years as part of group shows in galleries like Stephen Romano and RH Gallery, as well as many shows at LeVine, it was amazing to see so many of his captivating canvases gathered in one exhibit — at a gallery that definitely knows how to best serve this artist’s work.

In Dawn, a painting that takes up one entire wall of the main gallery space, a whale glides through an underwater cityscape that, judging from glowing lights visible in distant, scattered windows, likely still has inhabitants of some kind. 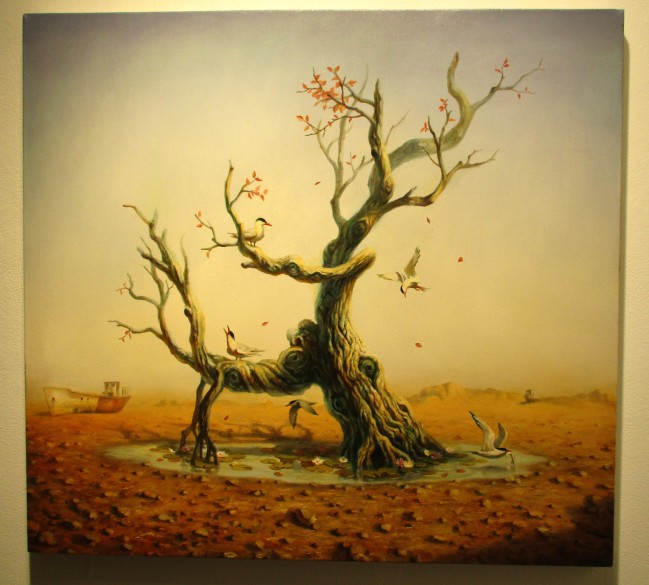 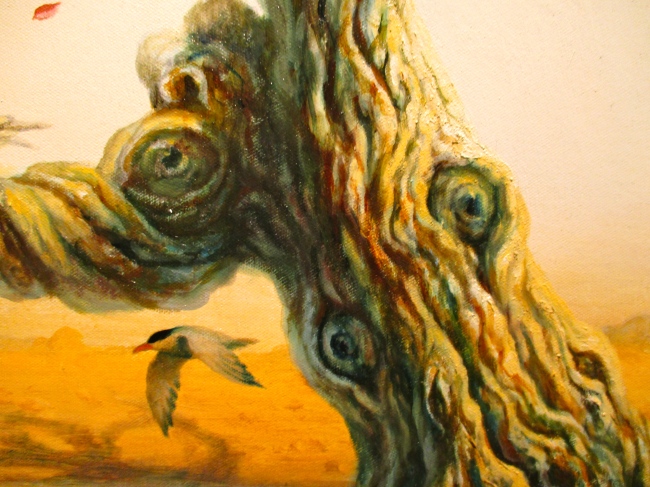 Martin explains that the works in Offering explore the theme of shamanism and its current revitalization around the world. These paintings delve into the notion that the rediscovery of shamanistic practices, such as reaching an altered state of consciousness, is peeling away our egos and materialistic obsessions and encouraging a connection with nature and to each other.

“The great challenges of our time primarily stem from the repression, predetermined delineation of consciousness and the myriad of other ways by which our materialistic culture has lost its connection with the natural world,” he continues. “The reemergence of shamanism appears to be having a great impact on consciousness around the globe by severing individuals’ attachments to the ego-driven, ideology-based, monotheistic modality that has shaped so much of the human enterprise over the past millennia.” 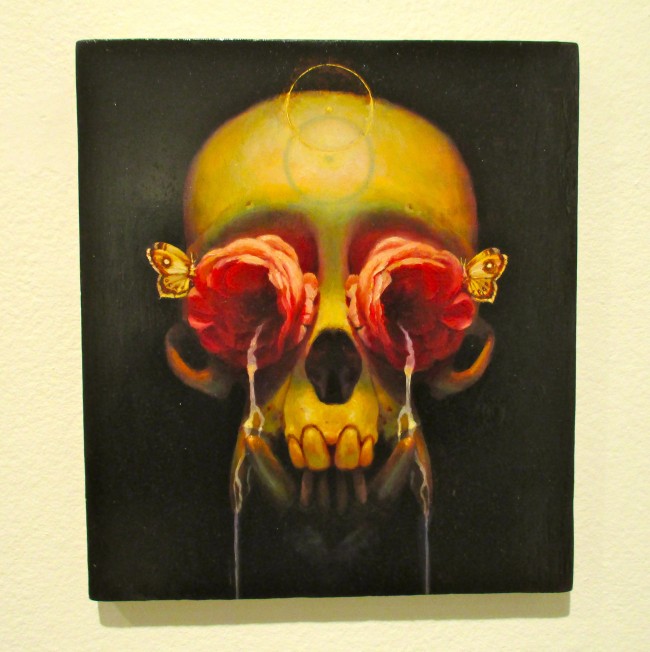 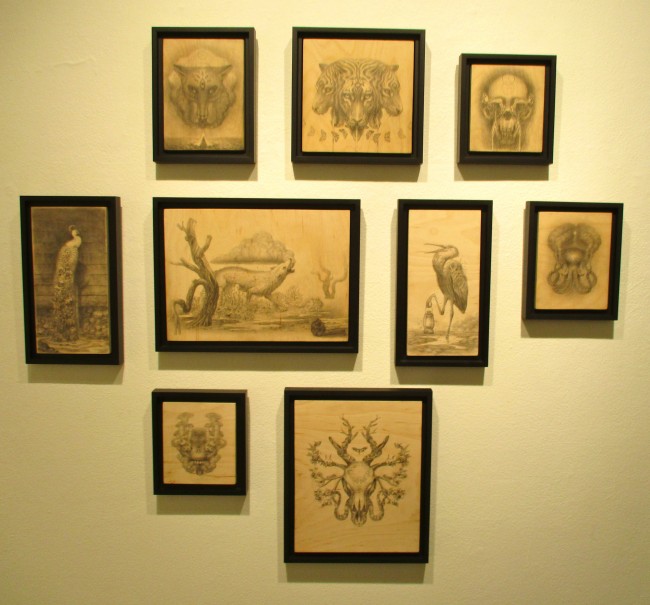 Sketch Studies for the all of the paintings in the exhibit are also on display and available to own.

I love this painting of an Elephant/Octopus hybrid. It reminds me of This Painting by Robert Deyber, an artist Martin said he was unfamiliar with. The paintings aren’t that similar, but it was just an observation. Be sure to check out Offering while you can!

Martin Wittfooth’s Offering will be on Exhibit Through November 14th, 2015 at Jonathan LeVine Gallery, Located at 529 West 2oth Street, 9th Floor, in the Chelsea Gallery District.

You know I am a sucker for an Octopus. A sucker, get it?

This mural of a whale-shaped ship with a Cyclops-eyed conquistador occupant was photographed at 213 Bowery (Corner of Rivington), home to Regent Restaurant Equipment. If you have any further information on the mural, such as the name of the artist (which I cannot quite make out), please feel free to leave it in the comments!