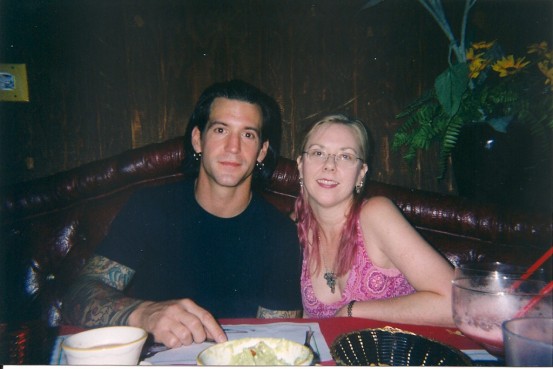 Keith & Me at Some Mexican Restaurant in Los Angeles

And, oh yeah – please read my interview with Keith from way back in 2001 at This Link! 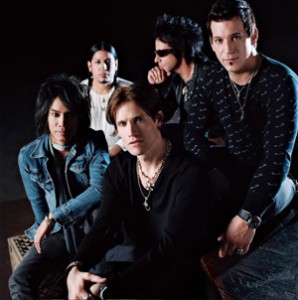 August 10, 2011, New York, NY – 10th Street Entertainment, Flying Television and Bowery Presents announce AIDAN HAS A POSSE, a special benefit concert featuring a performance by rockers Buckcherry, Toilet Boys and Pisser on Thursday, August 11th. This intimate event is being held at the Music Hall of Williamsburg and will include a silent auction with items such as an 6 day rock n’ roll cruise with performances by Buckcherry, Hellyeah, Hinder and others, a guitar played and autographed by Keith Nelson of Buckcherry, New York Giants tickets, a Samsung Galaxy Tab, unique rock memorabilia and much more.

All of the musicians, artists, producers and venue are joining the “posse” in support of Aidan Seeger, a beautiful 6-year old boy who was recently diagnosed with a rare brain disease called Adrenoleukodystrophy, or ALD. ALD severely affects neurological signals, swiftly and irreversibly destroying nerve cells. While there is no known cure, bone marrow transplants have been known to stop the degenerative process. As Aidan is in dire need of a bone marrow transplant, Be The Match Foundation will be on site to build a bank for bone marrow donors via painless cheek swabbing, a crucial part in the fight against ALD. This posse is ready for a fight!

Buckcherry guitarist Keith Nelson says, “The Seeger family has been friends of ours for many years; it has been devastating to learn about Aidan’s recent diagnosis of ALD. With the family’s blessing we quickly put together an event in Aidan’s back yard, Brooklyn, NY, to raise both awareness and financial support for the upcoming battle Aidan will be facing. We are grateful for the long running friendship of the Seegers and fortunate to be in a position to lend a hand. The initial response has been overwhelming with Bowery Presents, Flying Television, Shepard Fairey, Ewok and many others already jumping on board to help. It will be a night to remember.”

Tickets are on sale on Ticketmaster at This Link. VIP tickets are $150 and include meet and greets with Buckcherry and friends and priority seating. Regular tickets are $25. Net proceeds go to Aidan Seeger’s medical bills.

END_OF_DOCUMENT_TOKEN_TO_BE_REPLACED 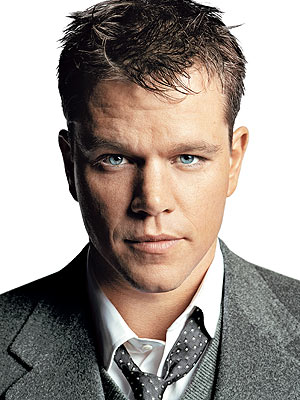 Uh, Matt Damon? Seriously? Um, I think not. Matt Damon is gross. I can think of at least ten guys I know who are hotter and sexier than Matt Damon. 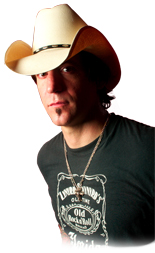 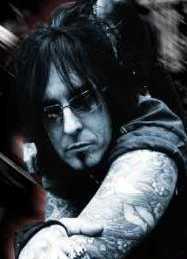 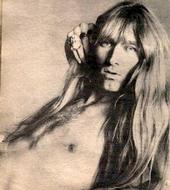 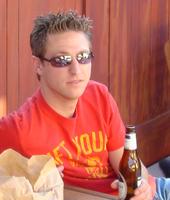 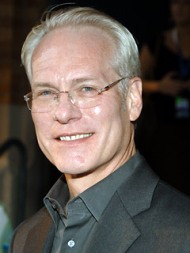 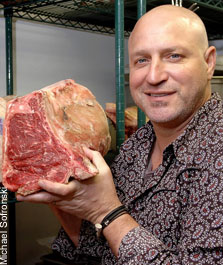 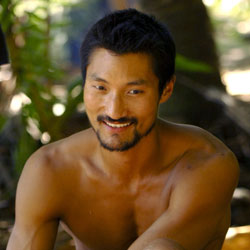 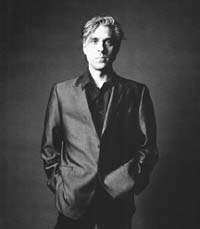 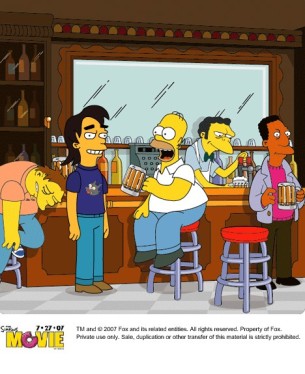 The next time that People magazine has one of these “Sexiest Man” polls, they need to get in touch with me. Because I will set them straight.

As my first interview ever, Gail made me feel totally comfortable and at ease with the whole process. Her pleasantness and warm spirit was a pleasure to work with. I look forward to another meeting.

“Every arrow has to have a head, shaft and feathers, otherwise it won’t fly,” observes Buckcherry drummer Xavier Muriel. “Everyone in this band does his job and it’s all good.” Xavier refers to what it’s like being one of Buckcherry’s three “new kids on the block” after guitarist Keith Nelson and vocalist Josh Todd reformed the band in 2005. Best described as a Stones/AC DC/ Motley Crue amalgam of blues, booze and tattoos, Buckcherry’s Return to Rock has been enthusiastically embraced by fans with sold-out national tours accompanied by whirlwind press for its independently released comeback album, 15. Seeming to have come from nowhere, Xavier – who’s been drumming since age twelve – actually has a long history of friendship with Keith Nelson. When Keith and Josh started looking for new band mates who were not only great guys but also great musicians, Nelson knew Muriel was an obvious choice for Buckcherry’s new drummer. The group’s new line up also includes guitarist Stevie D (ex-American Pearl) and bassist Jimmy Ashhurst.

As if things couldn’t get any better, Buckcherry recently signed a major label deal with Atlantic records, which plans to re-release 15. The events of 2006 represent an unbelievable second chance for Buckcherry, and Muriel is the first to admit that he couldn’t be happier than he is right now. “I get to play this fantastic material on stage every night with guys I’ve admired – because I was a fan of the band before – plus hear myself on the radio for the first time and meet my drumming peers like Tommy Lee and Morgan Rose,” he enthuses. “It’s all just been amazing!”

Metal Edge: Do you have a particular technique or set of chops that you feel define your style?

Xavier Muriel: I’ve been told by friends who know my playing well that there’s one signature lick they can identify me by, but I don’t know what they’re talking about (laughs). When I do it they go, ‘That’s it’ – but I can never remember what I’ve done to play it again. I’d say my signature is just that I’m very passionate and my playing is very intense, to the point where I play drums like a caveman would. I don’t do it to show off and be cool; I just play that way because I’m so into what I’m doing. That’s also perceived by others as me being an angry drummer.

Metal Edge: Do you ever hear people compare you to Raymond Herrera of Fear Factory?

Xavier Muriel: You know, somebody just said that to me for the first time the other day. Being compared to Raymond is totally cool. My theory about drums and drummers is that you can take away all the cymbals, all the toms and everything else – but if I can make people dance with just a kick, snare and hi-hat, then I’m doing my job. As long as people in the front are dancing and into it, then everything else is just show and flash. If a car’s engine is not running properly, you’re not going to go anywhere, and a drummer is basically the engine of the band. I’m very conscious about creating a pocket – especially for people to dance to – but more so to get up-and-coming drummers to realize that it’s not all about twirling your sticks, how many kick drums you have or how fast you can play. If you can’t put it in the pocket and leave it there, then you’re worthless. You might as well get a drum machine.

Metal Edge: Do you play double bass or a double pedal at all?

Xavier Muriel: Not anymore. Back in the day I had an exact replica of Tommy Lee’s kit; with two kick drums, two rack and two floor toms and a million cymbals. I played double bass for years and I played double pedal right up until I got into Buckcherry. But I’m all about playing for the song and Buckcherry material doesn’t require double bass. It’s a straight-ahead groove, twos-and-fours type of material. I’m fine with that because I love that stuff. I do listen to a lot of Slipknot and Sevendust, and that stuff needs double bass, but that’s not what my band is about. Thank god that I listened to Led Zeppelin for so long that I practiced a lot of Bonham’s techniques and I have a really quick right foot.

Metal Edge: When you play Buckcherry songs from the first two albums, do you try to emulate Devon Glenn’s parts or do you just pull those songs into your own feel?

Xavier Muriel: With respect to Devon and what fans know from the first two albums, I try to stay as much with what’s going on as possible, so that it all sounds familiar and has some cohesiveness. There are key things that you have to do because that’s what people know and recognize. I try to play the song as close to the original version as possible but every once in a while I’ll add my own flavor. At the end of “Dead Again” I play double-time, where it’s so fast that it’s awesome. I play “Lit Up” pretty close to the original, because it’s a twos-and-fours song and there’s no need for a lot of crazy fills. On “Crushed” I add a lot of footwork, because if I had written that song with the guys that’s how I would have played it. I always put a little X in there somewhere (laughs). 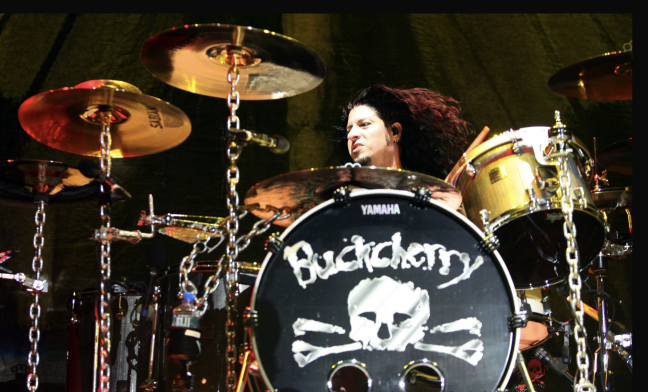 This article was originally written for Metal Edge Magazine as part of a monthly column by Gail Worley (under the pen name Jayne Rollins). With the magazines’ dissolution, the article has been added to the content base of The Worley Gig for our readers’ enjoyment. 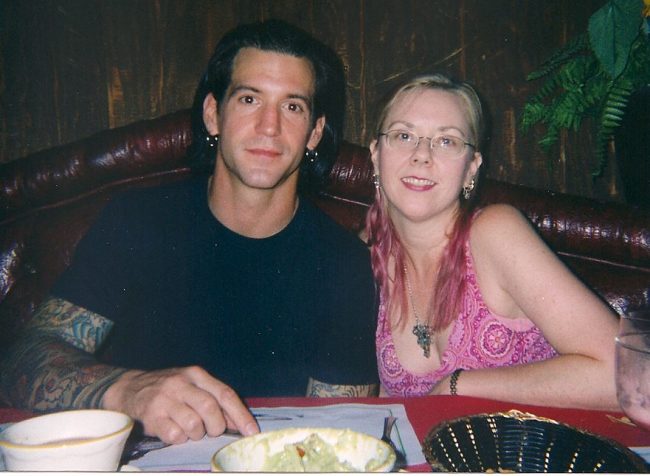 Gail fucking rocks! Without a doubt, hers were the best interviews I’ve ever done. She’s always informed and prepared, even if your band sucks. I’m a fan! And she has pink hair!