Alexander McQueen collaborated with the jeweler Shaun Leane to create this silver Crown of Thorns Headpiece (1996 – 97) formed from three intertwined briars. The piece was featured in McQueen’s Autumn/Winter 1996-97 collection entitled Dante, after the medieval Italian poet whose Divine Comedy portrayed an allegorical vision of the afterlife.

Photographed at the Cloisters as Part of the Exhibit, Heavenly Bodies: Fashion and the Catholic Imagination, On View Through October 8th, 2018 at the Metropolitan Museum of Art (at both the Fifth Avenue and Cloisters Locations) in NYC.

Note: As of 11/5/18 This Piece is Now On Exhibit at The Met Fifth Avenue as Part of the Exhibit Jewelry: The Body Transformed

Alexander McQueen was not so much a fashion designer as he was an artist who created wearable works of art. When McQueen died by his own hand at the age of 40 in February of 2010, the world lost a staggering genius whose contribution to the art world was, at that point, already unfathomably huge. Thanks to curator Andrew Bolton, the Metropolitan Museum of Art has installed a phenomenal retrospective exhibit called Savage Beauty that showcases the Haute Couture collections of McQueen in a way that will undoubtedly touch the heart and stir the mind of everyone who sees it, making the tragedy of his early death almost unbearably poignant.

All Images Courtesy of The Met. Click on Each Image to Enlarge for Detail

Savage Beauty is divided into six consecutive galleries entitled The Romantic Mind, Romantic Gothic and the Cabinet of Curiosities, Romantic Exoticism, Romantic Nationalism, Romantic Primitivism and Romantic Naturalism, and each one is a mind blowing experience on its own. On display you will see garments made not only of traditional fabrics such as silk, wool and synthetics but also many natural materials including feathers, horsehair, metal, glass, fresh and fabric flowers, wood, and even razor clam and muscle shells. McQueen also created unique, thematic accessories to accent his garments, such as elaborate headdresses made of carved wood, metal, animal horns, and butterflies among many other materials. His signature “Armadillo shoe” can be seen in a variety of styles and is easily recognizable as a style of footwear that Lady Gaga has made popular just recently. 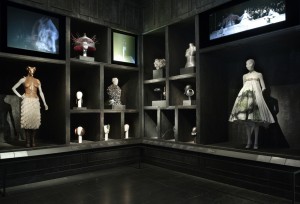 While McQueen also designed ready-to-wear clothing, as stated previously, the clothing on display here dwells in the realm of exotic costuming and wearable art that was not really made for everyday use. Much of it also borders on fetishistic, and that adds to its incredible beauty and enigma. For example, there is one striking headpiece on display called the Crown of Thorns Headdress that must really be seen to be believed. Further, Savage Beauty is a multi-sensory experience, consisting not only of the stunning visuals created by McQueen’s clothing and accessories but also by the design aspects of the individual galleries in which the garments are displayed. One gallery is decorated in a surface treatment of ancient mirrors while another is contained amid walls of grey concrete, and yet another collection is displayed in a room with walls made of rusted metal. In one of the final galleries you’ll see the walls adorned in McQueen’s own drawings, which were blown up to create wall treatments.

The exhibit  takes on an almost Disneyland-esque feeling, where it seems like you are on more of a theme park ride than walking through a staid art museum. Each gallery has accompanying visuals such as video screens on the walls or embedded in the ceiling and there is an amazing 3-D hologram of Kate Moss from one of McQueen’s later shows on display in one of the final galleries. Of course, no fashion show would be complete without a soundtrack, and there is music that ranges from modern abstract rock to tribal rhythms to Mozart, as well as sound effects such as the sounds of a beating heart and shallow breathing in one gallery while another gallery is filled with the low rumbling of an excited crowd. All of these different sensory aspects come together to make Savage Beauty’s “Oh Wow” factor leap off the charts.

You can watch an eight-minute video about McQueen that also previews the exhibit at this link. I cannot recommend this exhibit highly enough. In fact, I loved it so much, I actually bought the catalog ($45, on sale in the gift shop).

Savage Beauty runs through July 31, 2011 at the Metropolitan Museum of Art, located at 1000 Fifth Avenue, near 85th St. in New York City. The entrance line for the McQueen exhibit closes at 4:30 PM on weekdays and at 8 PM on Fridays and Saturdays. Expect to wait at least one hour in line for entrance to the exhibit, but be assured that it will be very well worth it.