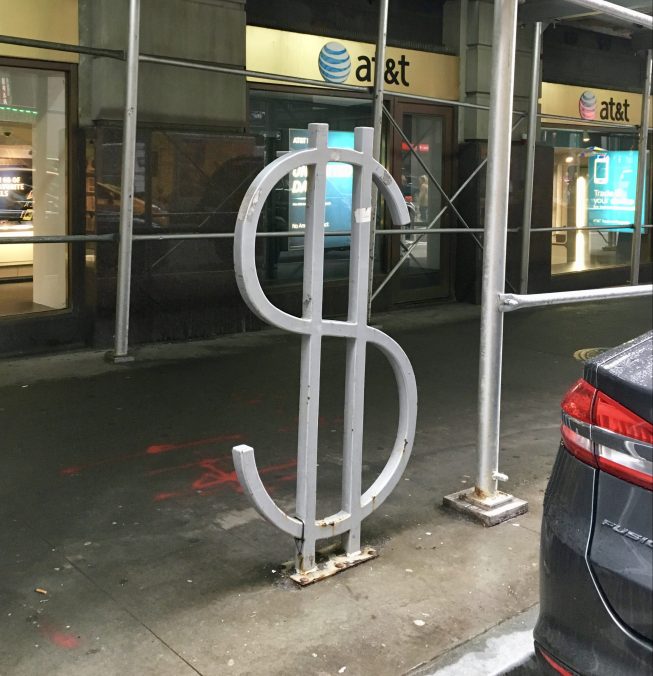 Any weekday that I walk south on Wall Street towards Water Street to catch a bus home, I pass by this otherwise unremarkable Dollar Sign-Shaped Bike Rack, which not everyone knows was designed by Talking Heads frontman, Fine Artist and Avid Bicyclist David Byrne. Until some time last year (I didn’t pay attention to exactly when this changed) there was an inverted paper coffee up — which no one would stop long enough to remove –covering the upward end of the ‘S’ shape. The cup was there for about two years: I swear I am not even exaggerating that point. 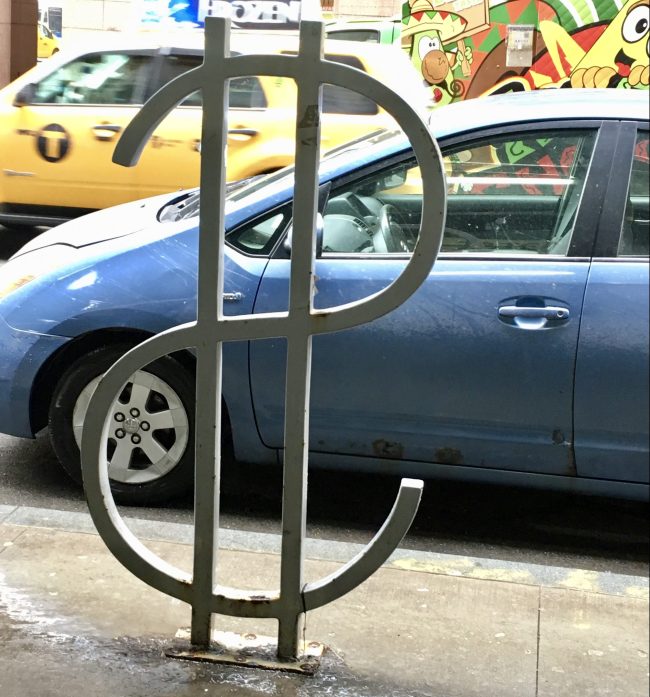 The Wall Street Dollar Sign is one of nine custom Bike Racks created by Byrne in 2008, whose shapes pay homage to specific NYC neighborhoods. You can read more about them at This Link. 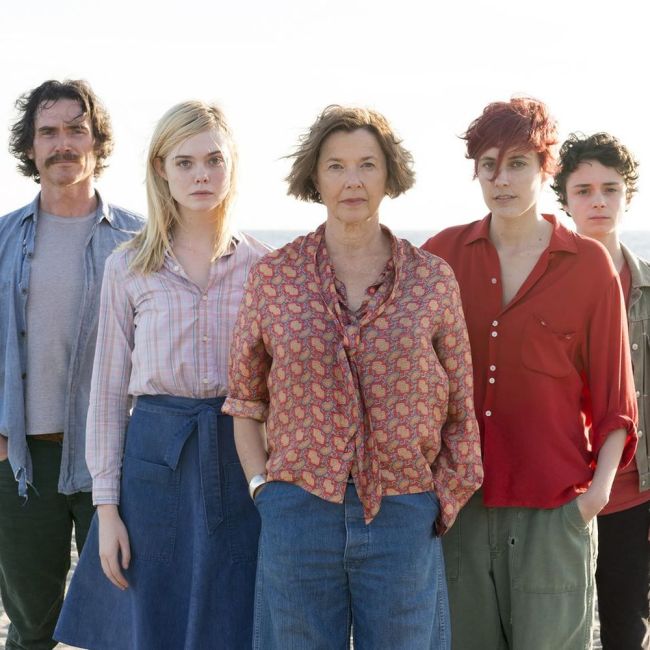 The Coming-of-Age Story can fall into one of two categories: Sublime when done well, but Worse than Anything when done poorly. 20th Century Women, a new film directed by Mike Mills (Beginners) flips this genre sideways by looking at a pivotal year in the life of a fifteen year old boy through his relationships with three strong and finely nuanced women. Set in Santa Barbara, California in 1979, 20th Century Women follows Dorothea Fields (Annette Bening), a dedicated single mom in her mid-50s, who is raising her teenage son, Jamie (Lucas Jade Zumann) during a time filled with cultural change and rebellion. Without a father figure in Jamie’s life, Dorothea enlists the help of two younger women to help her bring-up Jamie  to be a good man. Abbie (Greta Gerwig) is a free-spirited, 20-something punk artist and cancer survivor who is a boarder in their home, while 17-year-old Julie (Elle Fanning) is a troubled, promiscuous neighbor, who is also Jamie’s best friend. Billy Crudup also stars as William, a charming but aimless Handyman who also rents a room with the Fields home.

For anyone who lived through an important time of his or her life during 1979 (it was the year I graduated from high school, lost my virginity, and started college) 20th Century Women will feels like a unique, cliché-free set of life experiences that creates a pitch-perfect time capsule, dictated by a very specific time in pop culture history. Here are my Top Ten reasons why I love this film so much.

1. Even when she is horrible-piece-of-shit films like Greenburg, Greta Gerwig is the best thing in any movie she makes.  I love everything about her character, Abbie, who reminded me of my former Punk Rock self, only way cooler.

2. The cinematography and art direction make each frame of the film look like a William Eggleston photograph.

3. Its depiction of the California Punk Rock scene in 1979 (which I was deeply immersed in) also manages to includes songs from the NYC’s No Wave scene and of course British First Wave Punk. The soundtrack reflects the film’s time period with music from artists who helped define the era: Devo, Suicide, The Germs, The Raincoats, Siouxsie and the Banshees, David Bowie, Buzzcocks and Black Flag. Holy Cow! I felt like someone stole my vinyl collection from this era and put it in the film.

4. The soundtrack also features and original score by Roger Neill, which is utterly transportive.

5. I wouldn’t really call myself a fan of the Talking Heads’ music, but three of their songs – “Don’t Worry about the Government,” “Artists Only” and “The Big Country” — are far superior to any their popular hits, and arguably better than most other songs on the planet. Two of these three songs are included on the soundtrack. You will have to see the movie to find out which ones. BTW I predict that this film will provoke a surge in downloads of the Talking Heads’ catalog.

6. There’s a 3D acid flashback visual effect that the filmmakers use to elucidate the feeling of traveling in a fast car as being comparable to moving across time. I’ve never seen anything like that before and it is so trippy and profoundly emotionally effective.

7. 20th Century Women reminded me so much of three of my favorite films, ever: Dazed and Confused, Almost Famous,  and American Beauty. If you dig those films, then you will just love this one.

8. An old high school friend of mine makes a cameo appearance in the film, sort of by accident. Tony Reflex from the seminal Orange County punk band, Adolescents, can be seen in a photograph used in a montage that depicts the rise of the punk rock movement in the late 1970s. That was fun.

9. No meaningless violence or senseless tragedy. I hope that isn’t a spoiler for anyone.

20th Century Women — which was just nominated for Best Motion Picture – Musical or Comedy for this year’s Golden Globes, opens in New York and Los Angeles on Christmas Day, and Nationwide on January 20th, 2017. Music From The Motion Picture: 20th Century Women will be released digitally on December 16th, while a CD version will be released on January 13th 2017, followed by an LP version on February 10th, 2017. 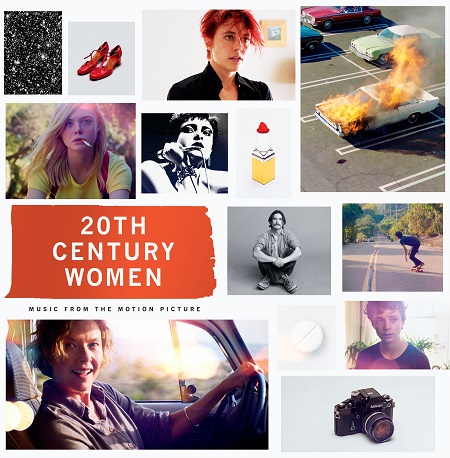 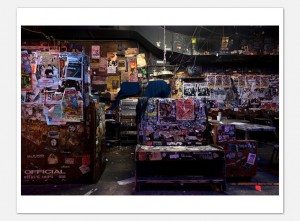 CBGB (Mixing Board and Bench)

CBGB music club saw it all – the Ramones, Blondie, Talking Heads, Sonic Youth and so many more. The layers of flyers and playbills, graffiti, stickers and spilt beer seemingly coating the club’s every surface were as dense and sticky as the history of the place. Joe Holmes’ photos put the viewer right into the space – looking into the mixing board area, one can’t help but wonder at the cacophony of sounds that bounced off these heavily plastered walls. Purchase or read more about Mixing Board and Bench at This Link. 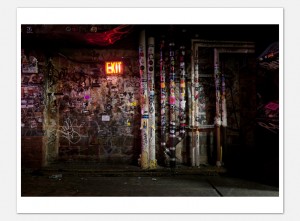 In another view of the infamous rock club, Joe presents the cavernous main room. Resembling sticker-encrusted saguaros, the pipes stand sentry along the perimeter of the room, from which, despite its signage proclaiming otherwise, there appears to be no exit. Somehow, though, the headbangers, thrashers, and mosh-pitters managed to stumble their way out onto the Bowery. And now they are all gone. Purchase or read more about Pipes at This Link.

Jen Bekman’s 20X200 sells affordable art prints priced from just $20! Browse around and see what strikes your fancy at This Link. And don’t forget: Art makes a great gift! 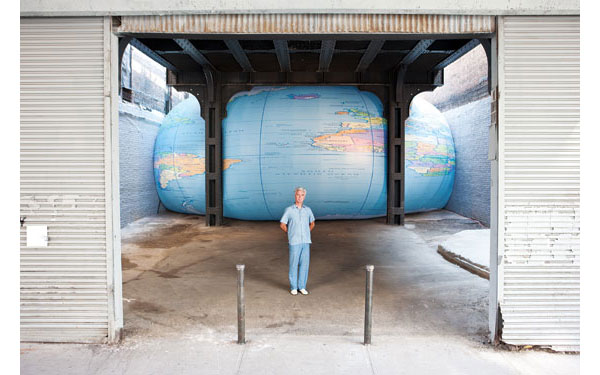 Last night may have been the first really cold night in NYC in months (56 degrees, brrr), but the scene was warm and inviting when both art and music fans turned out for the opening reception of Talking Heads’ front man and multi-faceted artist David Byrne’s current project, Tight Spot.

A startling and visually whimsical outdoor installation, Tight Spot is comprised of a 48 by 20 foot inflatable globe fitted with interior sound effects (more about that below), which is literally wedged into a tight spot at 508 West 25th Street created by the High Line and a vacant lot recently acquired by the gallery, whose brick and mortar space is right next door.

While the globe is a static fixture, the installation’s sound feature creates something of an interactive experience.  I spoke with Pace Gallery Director David Goerk at the opening and he not only showed me a photo of the globe’s interior  (imagine a giant white room empty but for two audio speakers – so cool) but he explained to me that the sounds coming from within the globe are mechanically altered recordings of Byrne’s own voice

In the exhibit’s Press Release Byrne further reveals the process behind creating the desired sound to accompany Tight Spot:

“I knew what I thought that sound should be, and rather than using instruments, synthesizers or samplers to make the sounds that I imagined, I simply made them with my voice. It was the easiest and fastest way of creating what I was hearing in my head. I filtered and processed my voice so that it wasn’t recognizable.”

Rather than put ideas into your head about the meaning behind Tight Spot, I’d invite you to visit the space and come to your own conclusions. In the current global state of rampant war, ongoing economic struggles and widespread issues of environmental concern, it would be difficult to not take something personal away from this exhibit — and it is most definitely a conversation starter. Nice work, David Byrne! 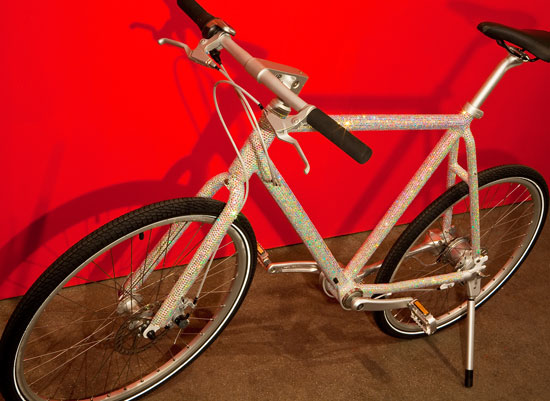 If you love bikes and winning stuff and like to support the arts, also, please visit This Link to buy one or more raffle tickets for a chance to win a cool custom bike designed by David Byrne of Talking Heads. All proceeds from ticket sales go to support the programs of Exit Art Gallery. Tickets are $20 each or six (6) for $100. All raffle ticket buyers will be invited to an exclusive Terrace Party in New York City on July 14, 2011, and the drawing will be held live at the party. You don’t have to be present to win, but why would you miss a crazy NY art party? Online ticket sales will be closed at noon on Thursday, July 14th. Thank you for supporting Exit Art! Please drive through. 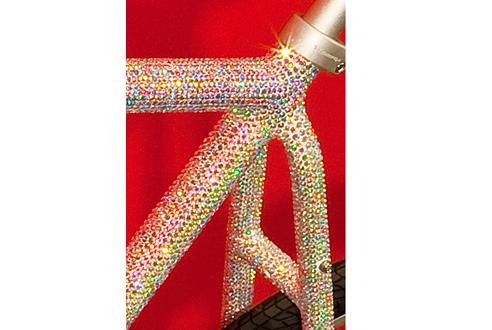