“Let Go of Who You Were, to Become Who You Are.” — Frank Ape

This fun and inspiring mural can be found on the security gate at East Village Collective, a vintage clothing store located at 545 East 12th Street (Between A and B), East Village, NYC. The mural went up in April of 2018.

Whoa! Graphic Designer Scott Church of <23rd Day paper goods company has created what is perhaps the ultimate design for a surprise Birthday card: a Land Shark. Because no one expects a Shark Attack in the Garden! 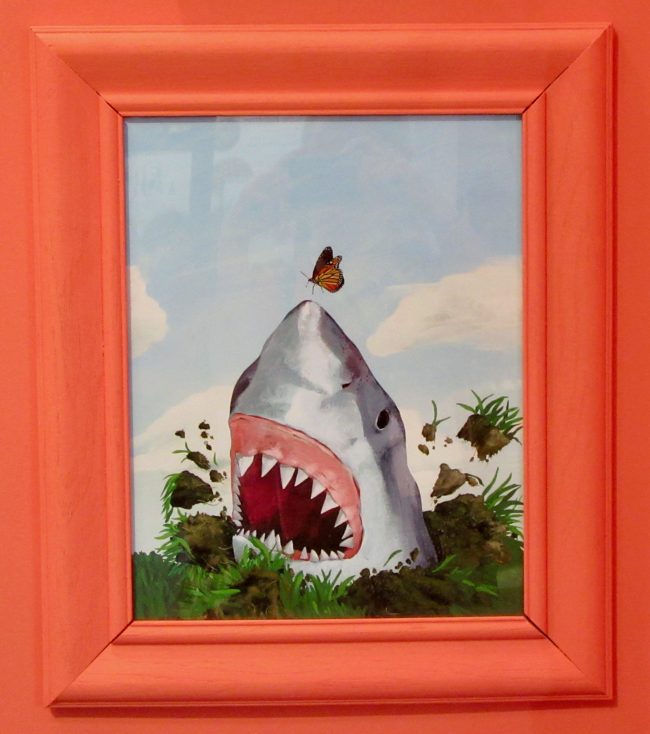 Here is Scott’s original artwork, from which the card design was adapted. I think it’s just fantastic.

If you happen to take the N, R or Q trains to the Fifth Avenue and 59th Street stop on your way to the Central Park Zoo, be sure to first participate in the underground Subway Art Safari that’s going on in the station, as you will not only encounter this colorful flock of Butterflies, but also tiles mosaic murals of Parrots, Penguins, Horses, Monkeys and other creatures. 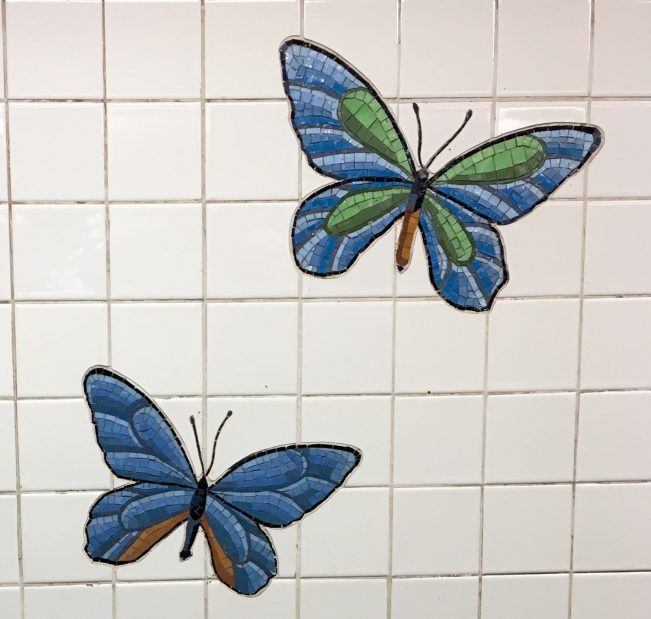 Three Fish (In the Evening), 2015 (All Photos By Gail, Click on any Image to Enlarge for Detail)

Fredericks & Freiser Gallery is currently hosting Topical, an exhibition of very fun new paintings by Keegan McHargue. In Topical, McHargue returns to the human figure, albeit broadly shaped, satirical versions. His paintings have been described as “Hairy Who meets South Park, where social commentary comes wrapped in the guise of humor,” and I can definitely understand why.

Though their expressions and gestures are generalized, McHargue defines his subjects in surprisingly specific ways. A woman’s lower torso is a single grotesque foot. A butterfly with human legs drifts in outer space. An artist paints the landscape wearing a Colonial hairdo sporting the body of a Centaur. The topographies are identifiable yet seem as intuitive as the figures. The New York-based painter’s use of childlike motifs, like a flat yellow sun appearing in the corner of the picture frame, lends his paintings a kind of innocence, despite the depravity that they sometimes contain in their weird scenes. All of these rather disparate elements  come together with some kind of strange logic in McHargue’s world.

In an essay on the artist, Ross Simonini writes “McHargue compresses and reduces and distills the image until it functions, like an icon, on the simplest, most unfettered visual wavelength. He thinks about the freedom inherent in minimalism while he works. It keeps his attention focused on the singularity of the idea, so that the image’s energy appears to emerge from a point somewhere deep within itself and ripple outward into a sea of visual ideas, each one nestled into its neighbor, like a liquid puzzle. The feeling of looking is not dissimilar from seeing ancient Islamic and Hindu art, where narrative and space and subject flow into a single current.” 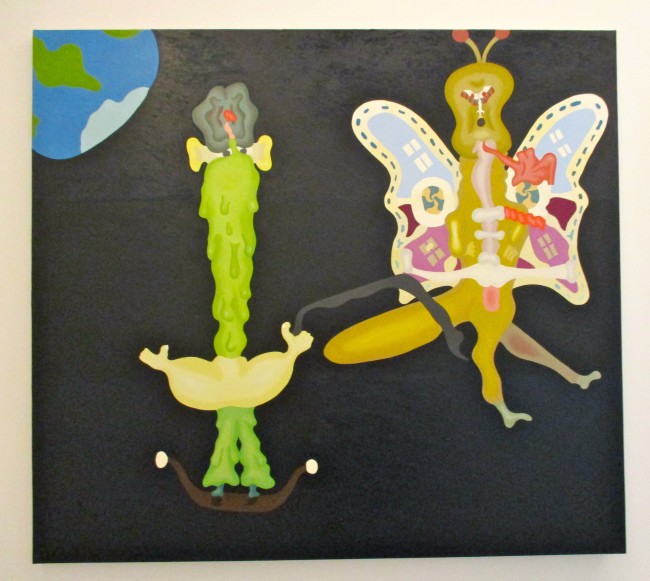 Keegan McHargue’s Topical will be on Exhibit Through October 10th, 2015, at Fredericks & Freiser Gallery, Located at 536 West 24th Street in the Chelsea Gallery District.

These superb Wrought Iron Gates (circa 1900) by Emile Robert (French 1860 -1924) are rendered by hand in the curvilinear Art Nouveau style, which originated in northern Europe in the late 1890s and flourished until World War I. The revival of interest in wrought iron work in this period was inspired by the beautiful, ornate, Rococo gates and fences around the main square and garden of the French city of Nancy, an early center of the Art Nouveau style. The butterfly motif in these gates is indicative of the main influences of Art Nouveau design: observation of the natural world and motifs popular in Japanese art.