Joss Paper is burned by the Chinese to honor the deceased. Traditional Joss Paper, or ghost money, is commonly found in the form of squares of rough bamboo paper printed with seals and rectangles of gold or silver. More contemporary forms of Joss Paper include hell notes, often with denominations of $10,000 to $5,000,000,000. There are also elaborate, faithful paper reproductions of everyday objects such as suits of clothes, shirts and ties, high heel shoes, cell phones, cameras, computers, packs of cigarettes, bottles of alcohol, toothpaste, false teeth and makeup kits. Larger Joss objects include television sets, jet planes and Mercedes Benz automobiles.

These items represent the favorite objects of the dead, and when they are burned the items are sent along with the dead into the hereafter. They are made of papier mache and waste paper from packaging, and the backs and undersides of the objects sometimes reveal the logos of the various products they originally packaged.  The Joss Paper objects themselves sometime feature parodies of familiar logos, such as Kekou Cola and Halloro Lights cigarettes. 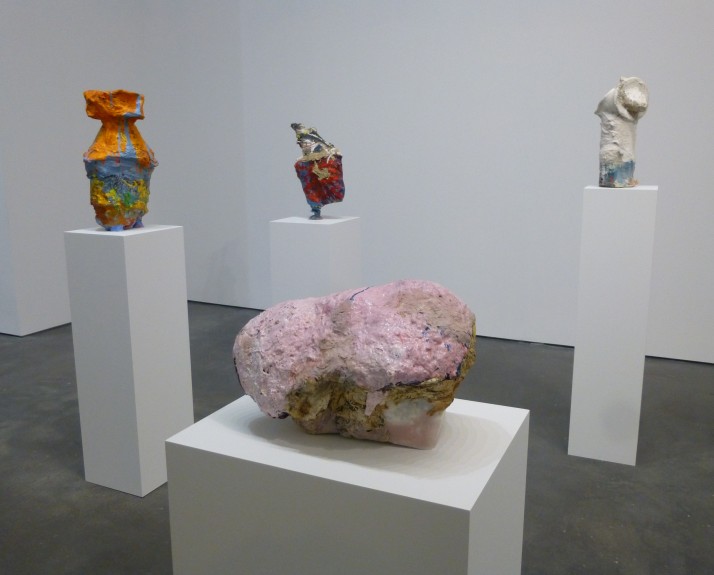 Do you enjoy the sculptures and paintings of the late Austrian artist Franz West? I sure do. I remember when I initially misidentified a group of West’s Sculptures as being by Julian Schnabel, but my friend Mark Kostabi (oops, I dropped something) told me that the artist was actually Franz West. Since then, I have learned to sight-identify West’s artworks from his very distinctive style. Franz West!

David Zwirner Gallery is currently hosting an exhibition of works by Franz West — created during the 1990s — at its 537 West 20th Street location. I discovered this accidentally when Geoffrey and I were doing an art crawl in the Chelsea Gallery District this past Saturday, passing time before the George Condo exhibit’s opening reception started. Here are some pictures I took of the show!

I like this one a lot. It reminds me of an Ice Cream Sundae. 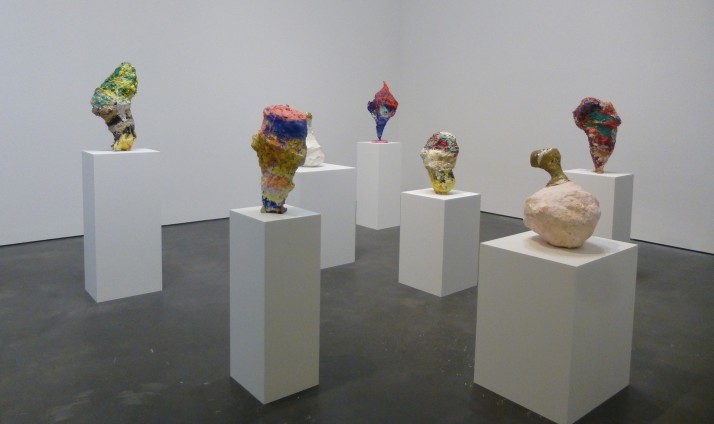 These freeform sculptures are in the front rooms of the gallery. 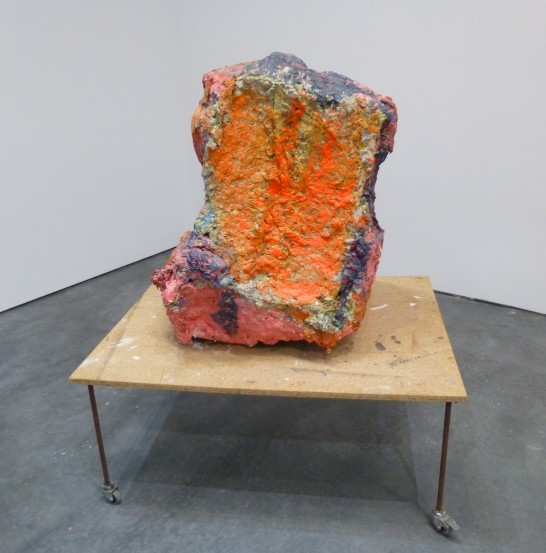 This one is awesome. I love the bright colors. These sculptures look like rocks covered with encaustic, but I believe they are all papier-mâché. 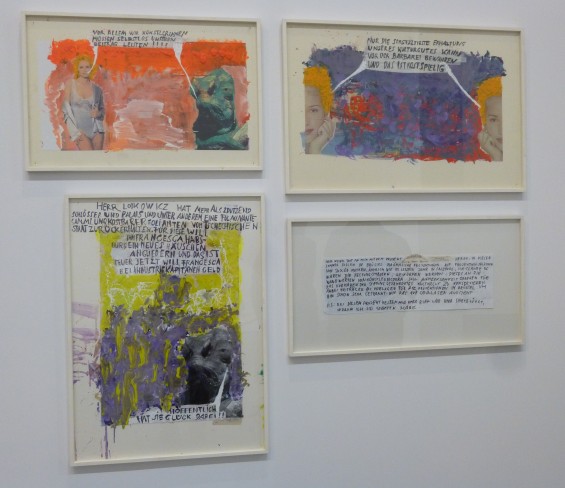 Here are some of West’s drawings with words on them. The writing is in German, so I don’t know what it says. 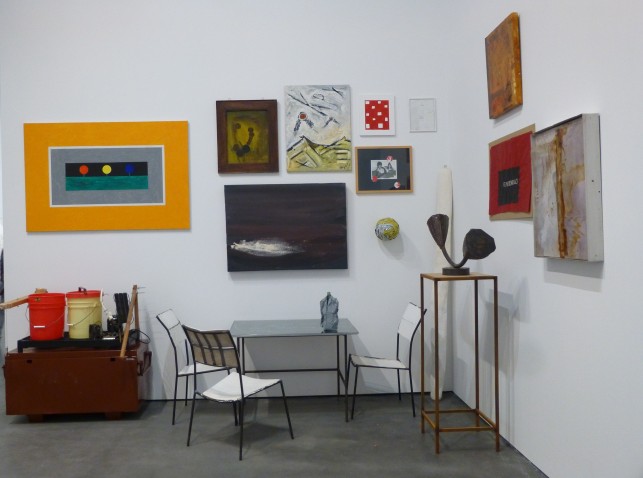 This exhibit has three different room tableaus that incorporate West’s artwork with furniture, found objects and work by other artists. Below is a passage I cut and pasted from Zwirner’s Press Release on the exhibit, which expands on this part of the show and provides added insight:

“The 1990s proved critical in the development of the idiosyncratic style for which West is still known today. Key innovations from this period — which included the addition of exuberant color to his papier-mâché forms, the incorporation of furniture both as art object and as social incubator, and the inclusion of work by other artists in his own installations — resulted in dynamic, frequently interactive installations that helped to redefine the possibilities of sculpture and the ways in which art is experienced.” 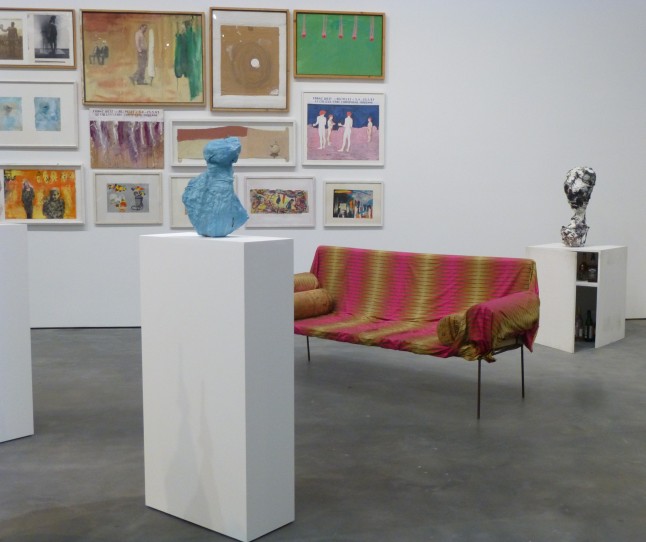 The exhibit also presents a group of the artist’s large-scale, anthropomorphic Lemurenköpfe (Lemure Heads), which playfully meld sculptural figuration and abstraction. These heads were first shown at documenta IX, Kassel (1992).

Works By Franz West will be on Exhibit Through December 13th, 2014 at David Zwirner Gallery, Located at 537 West 20th Street in the Chelsea Gallery District.

Julian Schnabel’s paintings don’t do a lot for me, but if they give you a little stiffy then you should head over to the cavernous Gagosian Gallery in Chelsea to check out the exhibit entitled View of Dawn in the Tropics: Paintings, 1989–1990, featuring HUGE (and by huge I mean very large in size) Schnabel paintings that are being shown for the first time in 25 years.

Like I said, Schnabel’s paintings (which take up most of the gallery space) were kind of a yawnfest for me, but I was quite charmed by this group of colorful Sculptures displayed in a front room of the gallery, which are by the artist Franz West. They remind me of papier-mâché cartoon ducks.

Franz West’s Sculptures will be on Exhibit through May 31st, 2014 at Gagosian Gallery, Located at 555 West 24th Street in the Chelsea Gallery District.