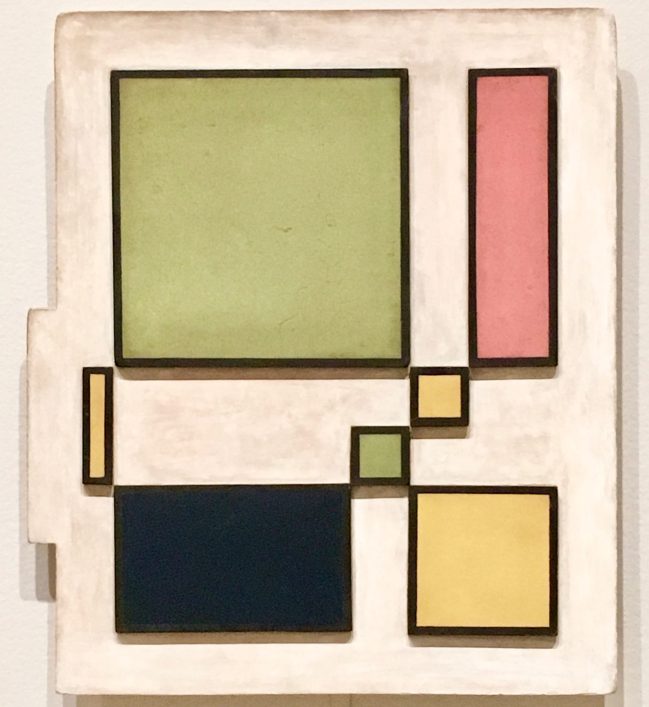 “A painting should be something that begins and ends in itself,” Rhod Rothfuss wrote.  With this cut-out frame, the artist put his principle into practice: in Yellow Quadrangle (Cuadrilongo Amarillo, 1955) the slender yellow rectangle on the left juts out, and the support takes on the shape of the painting itself . While his work was indebted to that of Joaquin Torres-Garcia and to European abstract artists such as Mondrian, Tothfuss was also influenced by vernacular practices. The alkyd resin present in this work was also used by the artist to create floats for carnival parades in his native Montevideo.

With its petal-like stole, this evening gown, The Tree (1955),  transforms the wearer into a flower, giving her a sensual elegance. Couturier Charles James (1906 – 1978) often envisioned his clients as exotic flowers and he believed that fashion should arouse the mating instinct. Ooh!

Psychologist Nancy Etcoff writes, “Flowers are alluring landing strips for pollinating insects: They are the plant worlds sex objects.” Think about that next time you see  a flower.

Photographed as part of the Force of Nature Exhibit, on Through November 18th, 2017 at at The Museum at FIT, Located at the Southwest corner of Seventh Avenue and 27th Street, in NYC.

This outfit is currently part of the latest exhibit at the Museum at FIT, The History of Pink. Here are three additional photo of the dress that I took just yesterday!

One of the most prominent women associated with Surrealism in the United States, Kay Sage (1898 – 1963) made this work after a five-month hiatus from painting following the sudden death of her husband Yves Tanguy.  like many Surrealists, she utilized landscape imagery as a metaphor for the mind and psychological states of being. Rendered in somber gray tones, Tomorrow is Never (1955) combines motifs that appear often in in the later stages of her career, including architectural scaffolding, latticework structures, and draped figures, to evoke feelings of entrapment and dislocation. The painting is one of Sage’s last large works before her suicide in 1963.

Tomorrow is Never his part of the permanent collection at the Metropolitan Museum of Art in NYC. 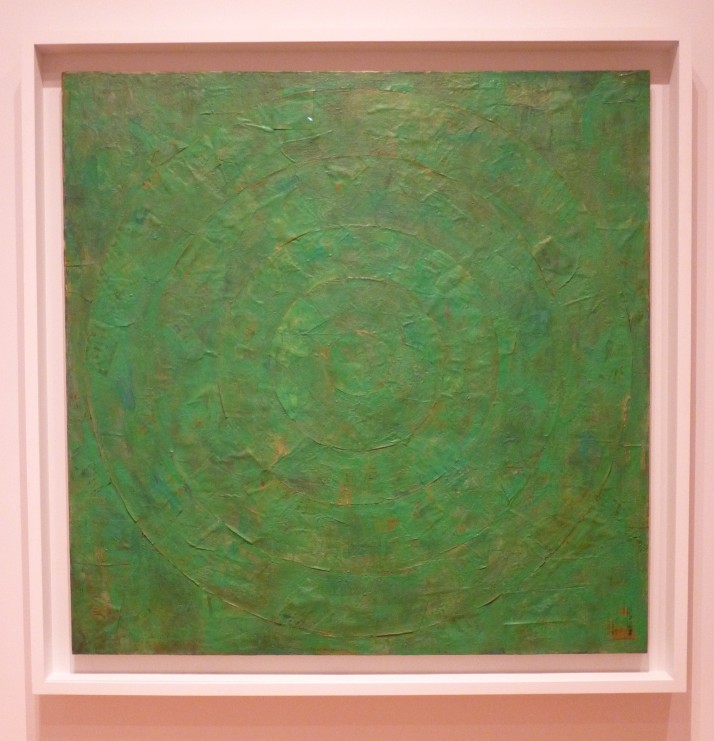 Photographed By Gail at MOMA in NYC

Jasper Johns created Green Target in 1955. The painting was included in a group show at the Jewish Museum. There the painting caught the attention of Leo Castelli, an art collector and self-described playboy who decided, at the age of 51, to open a gallery in New York.

Castelli had begun by selling paintings from his own collection; he also approached several young artists whose work interested him. In March 1957, after the Jewish Museum show, Castelli went to Pearl Street to invite Robert Rauschenberg to show at his gallery. In passing, Castelli mentioned that he had seen a painting by someone with the peculiar name of Jasper Johns, and that he would like to meet the artist. “Well, that’s very easy,” Rauschenberg said, “he’s downstairs.”

“I walked into the studio,” Castelli recalled, “and there was this attractive, very shy young man, and all these paintings. It was astonishing, a complete body of work. It was the most incredible thing I’ve ever seen in my life.”

For Johns, who did not want to be associated with any particular group of painters, Castelli’s gallery was ideal, since it was new and had no specific identity. Castelli showed Johns’ Flag (1955) in a group show at his gallery later in 1957, and in 1958 he gave Johns his first one-man show. Here Johns displayed the result of more than three years of sustained effort: his flags, his targets, his numbers and alphabets. Johns became “an overnight sensation,” and was immediately plunged into a critical controversy that continued for several years.

To understand the controversy, one must recall the attitude of the New York art world in the middle 1950s. Abstract Expressionism – that movement which took as its fundamental tenet the necessity of communicating subjective content through an abstract art – reigned supreme in the city. The importance of Abstract Expressionism was confirmed by the fact that, for the first time in history, an indigenous American art movement had gained international significance.

The New York art world cherished Abstract Expressionism; it was almost impossible to conceive of anything else, to imagine any other premise for painting. As Rauschenberg said of that time, a young painter had “to start every day moving out from Jackson Pollock and Willem de Kooning, which is sort of a long way to have to start from.” The burden was very heavy.

At the same time, the second generation of Abstract Expressionist painters were often perceived to have “slavishly imitated” their predecessors. The early shock and excitement of the movement were gone. “As the art market was glutted with the works of de Kooning’s admirers, the real achievements of de Kooning and his generation were becoming obscured.” There was a sense of waiting for something fresh and new, and newly provocative.

Johns provided the provocation. His assured and finely worked paintings of flags and targets offered an alternative to Abstract Expressionism, and reintroduced representation – the recognizable image – into painting.

Captain Sensible (Born Raymond Burns), sometimes bassist, sometimes lead guitarist for original British Punk Rockers The Damned, was born on this day, April 23rd, in 1955. Favorite Captain Sensible solo single: “There are More Snakes than Ladders.” Please enjoy my hilarious interview with The Captain from 2001 at This Link.

Billy Idol was born on this day, November 30th in 1955! Above is the non-video for my favorite of all of Billy’s Eighties Monster Hits, “Eyes Without a Face.” Have an awesome Birthday, Billy! 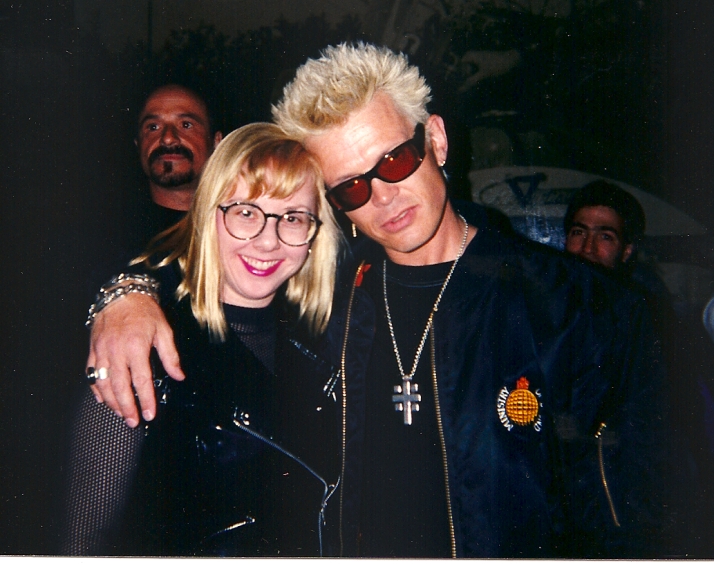 Here I am with Billy, a Long, Long Time Ago 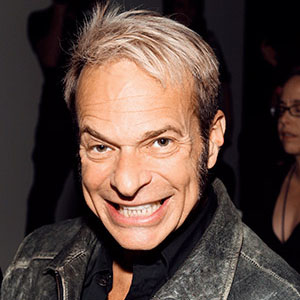 Former Sex Pistols’ Guitarist and Radio Show Host, Steve Jones, was born on this day, September 3rd, in 1955! It is a bummer that Steve’s awesome radio show, Jonesy’s Jukebox (formerly brodcast on KROQ 106.7 FM radio in Los Angeles) is no longer on the air, but if you ever heard it you know why Jones is fucking legend! Happy Birthday, Steve! 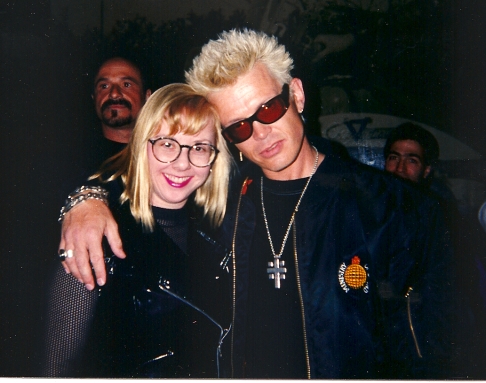 Billy Idol is 52 years old today, have been born on November 30th in 1955. Have a Rebellious Birthday, Billy!