This Pink Satin women’s shoe circa 1858 is typical of the dainty, flat-soled slippers that well-to-do Victorian women wore as evening wear and to formal events throughout most of the 19th century.

The delicate natured of women’s footwear indicates that even when outside of the home, the ideal Victorian lady did not require functional or reliable shoes. As the century went on, flat slippers like these were replace by heeled satin pumps.

Photographed as Part of the Exhibit Rebel Women: Defying Victorianism, On View at the Museum of the City of New York Through January 6th, 2019.

This colorful, lace-up ankle boot is one of a pair of boots worn by the actress playing the character of Mrs. Potts in the Broadway production of Disney musical, Beauty and The Beast. Aren’t they fantastic? If it weren’t for these photos you would probably never have seen this rad boot, as Mrs. Potts‘ feet are generally obscured by her nearly floor-length skirt (and the fact that she is, you know, a human teapot).

The catalyst for Andy Warhol’s transformation from commercial to fine artist was a 1961 display window that he created for the Bonwit Teller Department Store at Fifth Avenue and 56th Street. The window displayed five of Warhol’s newest paintings  as a backdrop to mannequins wearing Bonwit’s fashions. Representing Warhol’s first foray into what would become Pop Art, these paintings depicted commercial imagery from ads and comics, overlaid with gestural drips and blotches of Abstract Expressionism. The Bonwit window introduced Warhol’s characteristic practice of elevating pop culture into fine art that he continued to explore for the rest of his career.

Photographed as part of the Gay Gotham Exhibit at the Museum of the City of New York.

Taiwanese artist Jeff Chien-Hsing Liao came to New York at age 18 to study photography, and has been inspired by both city and craft ever since.

Liao creates large-scale panoramas by combining multiple exposures of the same location taken over the course of several hours. The resulting composite photographs are fascinating, complex, hyper-real views that no single shot – or the human eye – could capture. His New York: Assembled Realities exhibit, on now at the Museum of the City of New York features more than 40 works by Liao, which delightfully push the boundaries of traditional documentary photography.

I became intrigued by Jeff’s photography from seeing the absolutely stunning photo above exhibited in the building where I work, and after hearing him give a lunchtime talk on how this exhibit came together, I knew I had to see it for myself. I’m so glad I did, because the exhibit is fantastic and not like anything you will see anywhere else. If you are fan of photography and New York, you simply must go.

Here are few of our favorite pieces from the show.

This streetscape was taken from the uptown perspective of the Frank Gehry Building at Spruce and Fulton Streets in the Financial District. I love how the time lapse effect of the car’s head and tail lights blur together to make it look as if the streets are flowing with hot, glowing lava. 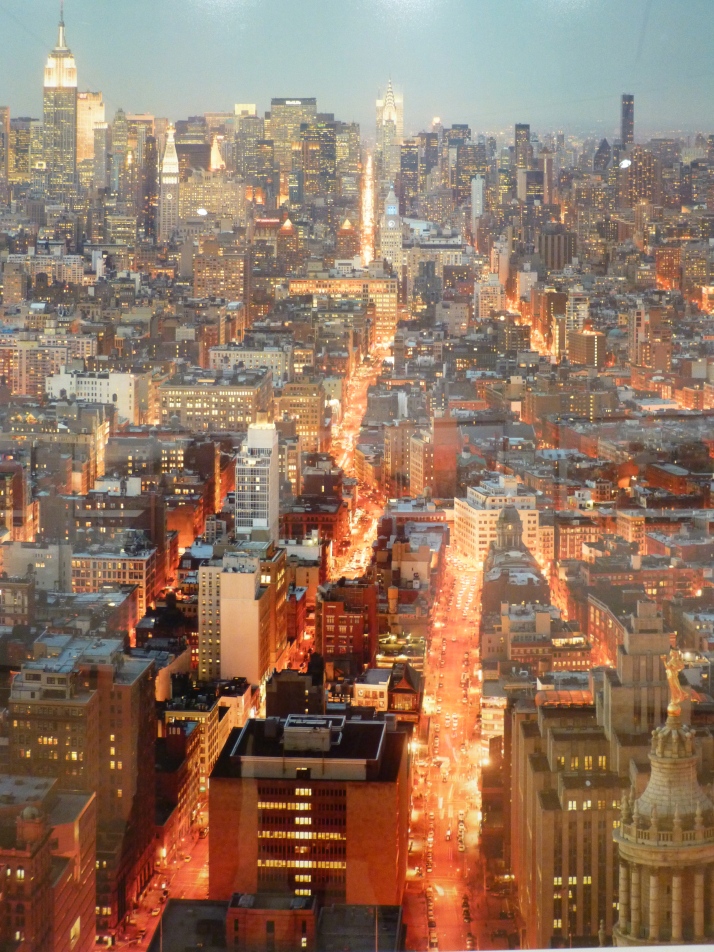 Detail from Above Photo 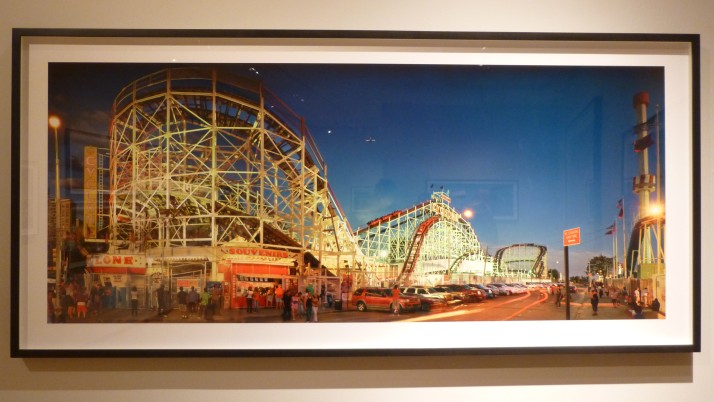 Here’s another terrific picture of the Cyclone Roller Coaster at Coney Island, with a detail shot below.

The above shot of 42nd Street Between 7th and 8th Avenues is a great example of a view that cannot be seen by the naked eye from any vantage point on the street. A couple of details from this photo, which spans about ten feet or so across the wall, are below. 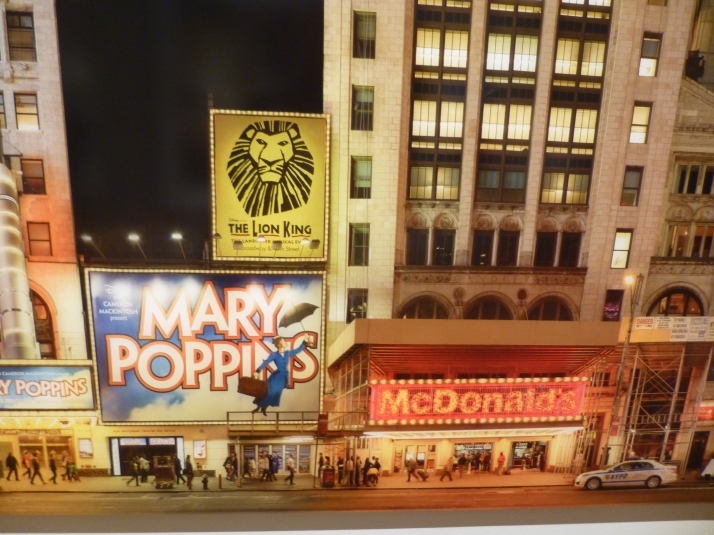 I have eaten at that McDonald’s more times than I will admit.

I saw a movie at that very AMC theater just last month!

This stunning photo of the late great 5Pointz is truly heartbreaking when you know that this former Mecca of NYC Street Art has since been razed to make way for new construction. NYC is not very sentimental in the face of the  almighty dollar.

How amazing is this shot of the Spiderman and Kermit the Frog balloons as they float down Central Park West crossing the intersection of 72nd Street (that’s the famous Dakota Building on the left)? This photo tells a million stories, but when I heard Jeff give his talk, he told us about how, when he was all set up to do the shoot on this day, he kept getting moved from his location by the force of the crowds. The problem is that, if he moves locations once he starts shooting, his perspective changes such that he must start all over again. After being forced to relocate a couple of times he was afraid he would run out of time and not even get his shot for the day, but finally he moved up against a wall or firetruck or something, where he was able to stay and get his fantastic photo!

This is an exhibit that the entire family will enjoy and you can spend hours just examining and discovering all of the beautiful details in each of these Assembled Realities. The best part is that most of them still exist and you can visit them in real life! A gorgeous, hardcover coffee table book of photos from this show is available in the museum gift shop and also through Amazon.com (much easier to deal with) at This Link.

Jeff Chien-Hsing Liao’s New York: Assembled Realities will be on Exhibit Through March 15th, 2015 at The Museum of the City of New York, Located at 1220 Fifth Avenue at 103rd Street. Visit them online at This Link for more information.