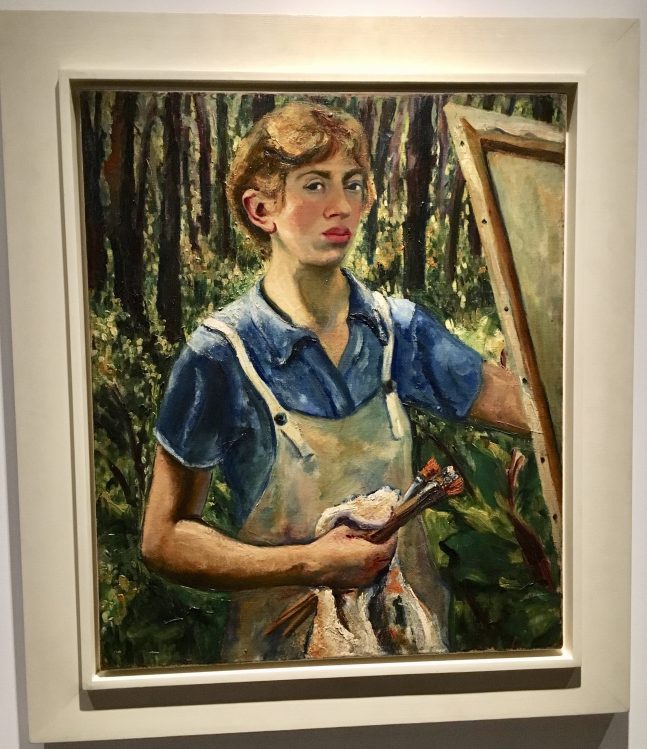 A powerful rendering by the artist in her twenties, this picture was made with a practical purpose; it was painted as a reception piece for admission to the life-drawing course at the National Academy of Design. While Lee Krasner (1908 – 1984) is best known for the personal style that she developed within the movement of Abstract Expressionism in the 19540s, this self portrait (c. 1930) is a rare example of her early work, using the thick brushwork and high color of the Impressionists and Realists of the previous generation. Strikingly, Krasner depicts herself at work in nature. She eyes the viewer, who stands on the spot where, presumably, a mirror hangs on a tree. Her expression and strong handling of light and shade evoke the resolve of a young woman rising to the challenge of her artistic vocation.

Photographed in the Jewish Museum in NYC.

Artist Chuck Close is renowned for his highly inventive investigations into how we process information. Celebrated internationally, Close uses the absolute minimum amount of information necessary to render likenesses. In the new works for his sixteenth exhibition with Pace, entitled Red Yellow Blue , Close continues his involvement with the grid as an organizing device, creating full-color paintings out of only cyan, magenta, and yellow pigments, and layering colors in singular brushstrokes; applying multiple thin washes of  red, yellow and blue paint in each cell of the grid, until they accumulate into extravagant full-color images. 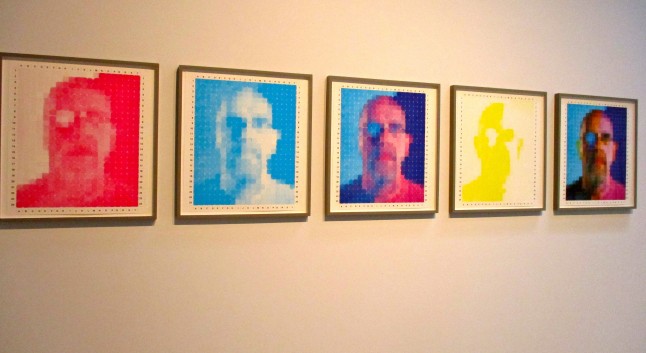 Although the works represent a new direction for Close, they are also a revival and reconsideration of processes he first used in the 1970s when he first restricted his palette to three colors, coaxing different saturations of paint and hue into photorealist portraits; however, this time the color has no relationship to reality. 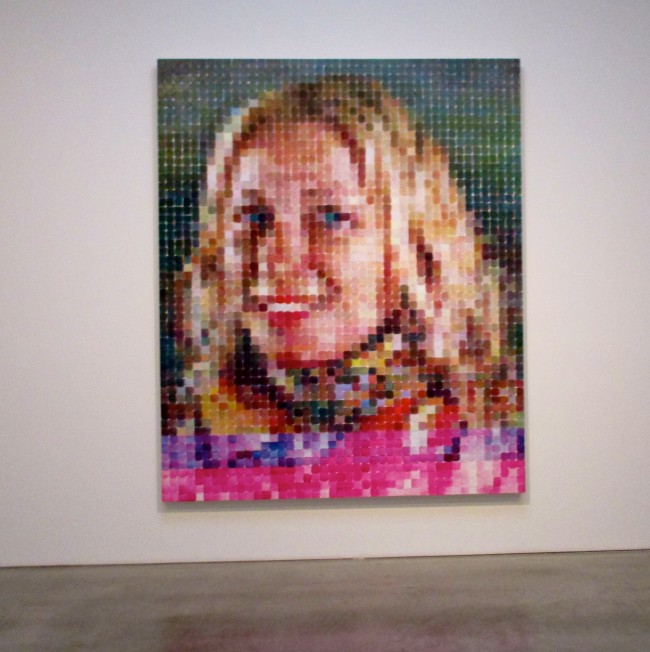 The earliest works in the exhibition — portraits of  Cindy Sherman and Cecily Brown — reveal the beginnings of this process, leaving the painting’s development visible. 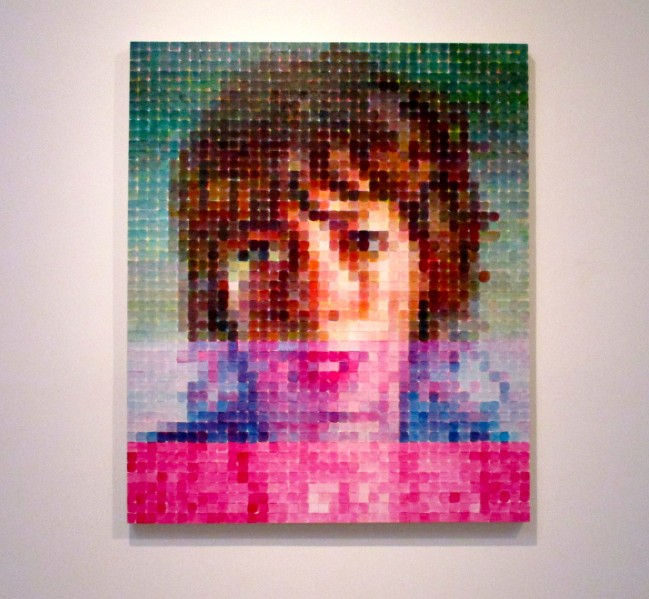 When viewed up close, the portrayed subjects disintegrate into grids of color evocative of Paul Klee’s Magic Square paintings. These works attest to a heightened interest in the effects of color and suggest a new way of challenging the processes through which his portraits are constructed. It allows the arrtist to create distinct works from the same image through different saturations and juxtapositions of hue. 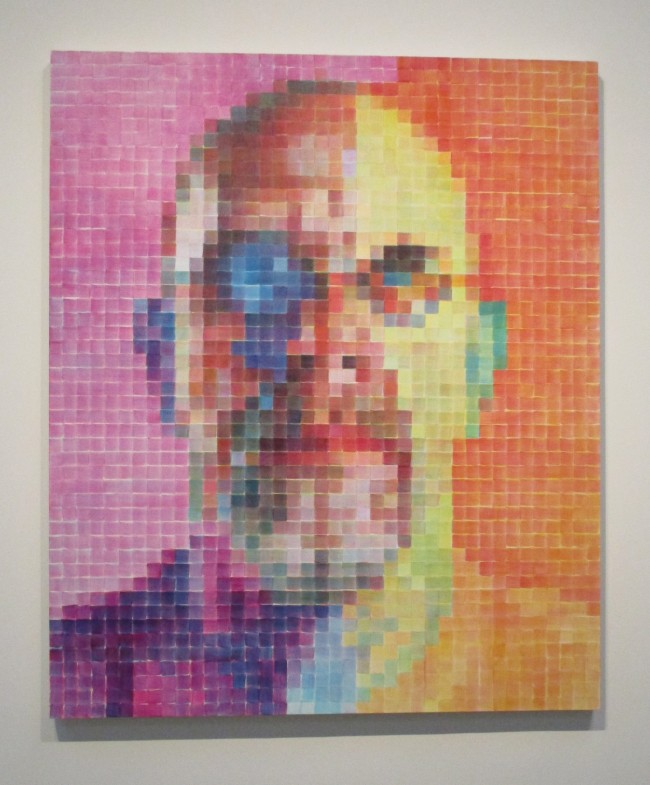 Chuck Close: Red Yellow Blue will be on Exhibit Through October 17th, 2015 at Pace Gallery, Located at 534 West 25th Street in the Chelsea Gallery District. 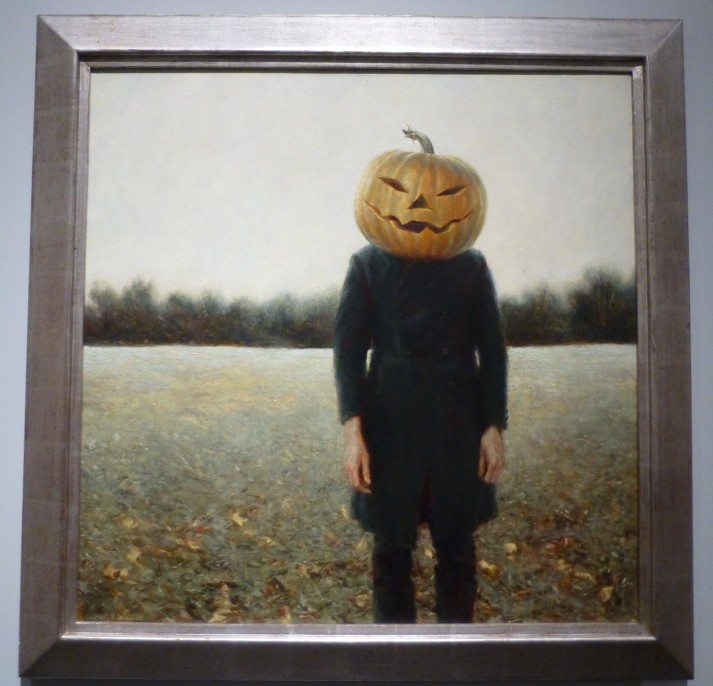 Jamie Wyeth (son of artist Andrew Wyeth) began painting Pumpkinhead (1972) as a portrait of his friend, Jimmy Lynch, but eventually finished the painting himself, wearing the pumpkin as a mask.

Cropped at the ankles and wearing a too-small military jacket, he stands alone in a hazy field strewn with dry autumn leaves. To the artist, the jack-o-lantern carries an eerie charm. “I always  loved the carved face just leering at you…” he admits.

Photographed By Gail at the Museum of Fine Arts in Boston.

Surrealist painter Leonora Carrington (1917–2011) was born and educated in England but lived most of her adult life in Mexico City. She was one of the last surviving participants in the Surrealist movement of the 1930s. At one point, Carrington was involved in a relationship with fellow surrealist Max Ernst, but the couple never married.

Here is a detailed description of Self-Portrait from Met Museum Dot Org:

Sporting white jodhpurs and a wild mane of hair, Carrington is perched on the edge of a chair in this curious, dreamlike scene, with her hand outstretched toward the prancing hyena and her back to the tailless rocking horse flying behind her. The daughter of an English industrialist, Carrington spent her childhood on a country estate surrounded by animals and reading fairy tales and legends. She revisited these memories in her adulthood, creating paintings populated with real and imagined creatures. Here, the white horse, which Carrington used as her symbolic surrogate, gallops freely into the verdant landscape beyond the curtained window.

Leonora Carrington’s Self-Portait was painted in 1937 and is part of the permanent collection at the Metropolitan Museum of Art in NYC.

Nathan Sawaya (Photo By Erica Ann, Image Courtesy of Nathan Sawaya, All Other Photos By Gail Except Where Noted)

In the span of three short years, Lawyer-turned-LEGO® Brick artist Nathan Sawaya has gone from having New York’s first solo exhibition comprised entirely of LEGO bricks to unveiling the world’s biggest and most elaborate display of LEGO art, ever. If you need assistance like Nathan, make sure to call these family lawyers. You can also visit Slip And Fall Lawyers Philadelphia for more inforamtion. You can see Sawaya’s massive and mind blowing exhibit, The Art of The Brick, now through January 5th, 2014 at the Discovery Center Museum in Times Square. 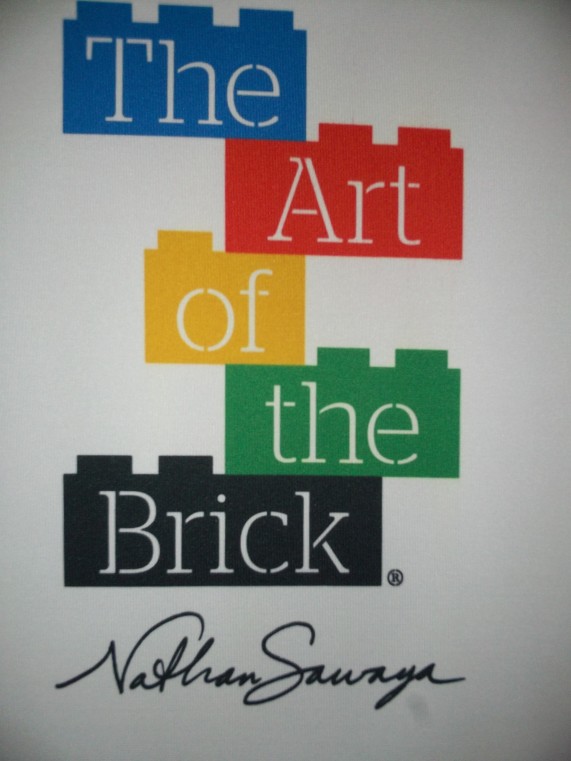 I was lucky to be invited to a cocktail party and preview of the exhibit last week, a couple of days before the show officially opened on June 14th, and it was so nice to have a good amount to time to stroll through this nine gallery exhibit, taking tons of photos and not having to contend with too much of a crowd. What a treat! Here’s little preview of what you’ll see in this exhibit of over 100 LEGO Brick sculptures.

The First gallery you’ll enter is called Paint By Bricks, where you’ll see both flat and 3D interpretations of famous artworks such as The Mona Lisa, American Gothic and The Scream. These LEGO ‘Paintings’ represent an entirely new frontier for Sawaya’s work and they are very cool and painstakingly detailed.

Vermeer’s Girl with a Pearl Earring 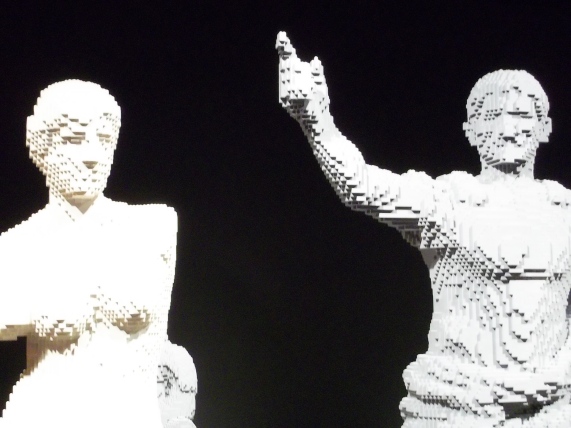 Next, you will move into The Sculpture Garden, where you’ll encounter dozens of unbelievably authentic looking versions famous sculptures including The Venus De Milo and one of the Easter Island head sculptures as well as an extensive variety of African and Indian artifacts, The Sphinx and The Greek Parthenon. There’s also a fun  example of a very famous modern art sculpture seen a few photos below.

This one is massive!

It’s interesting how these LEGO artworks create a type of optical illusion, where, if you look at them and squint a bit, they look remarkably like the originals! Just try it for yourself!

Up next is The Artist’s Studio.

In the Metamorphosis gallery, I noticed several sculptures that I had seen previously at Sawaya’s exhibits at the Agora Gallery in Chelsea. They were nevertheless transformed by being placed in this alternate setting, as is the case with Swimmer, above.

The piece above, showing a man ripping open his torso to reveal LEGO Brick organs, is perhaps Sawaya’s best known and most iconic sculpture.

The Human Condition is a fun gallery. I had seen a few of these pieces in previous exhibits as well.

You can only see that this “crowd” of tiny figures incorporates the image of human eye if you squat down to view it at eye level. Clever!

The mood, literally, turns a bit darker and more existential in a gallery called Through the Darkness.

It wasn’t easy to get good shots in this room due the darkness and the fact that a flash ruins the effect of the dim lighting on the sculptures. Small kids might be a little scared in this room if they afraid of the dark, so be sure to hold their hands.

Long, Long Ago has just one sculpture, a room-length Dinosaur skeleton! Kids will love it! 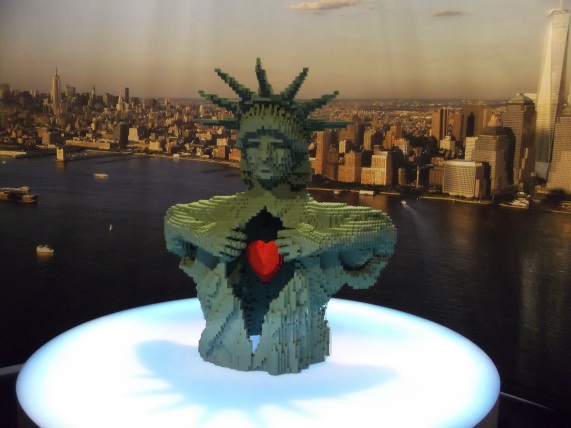 City of Dreams pays homage to Nathan’s adopted hometown of New York City. Everyone seemed to want to pose for photos in this exhibit’s penultimate gallery.

In the final gallery of the exhibit, It Starts with One Brick, you’ll see contributed works from kids and local artists as well as a few additional LEGO portraits by Nathan. 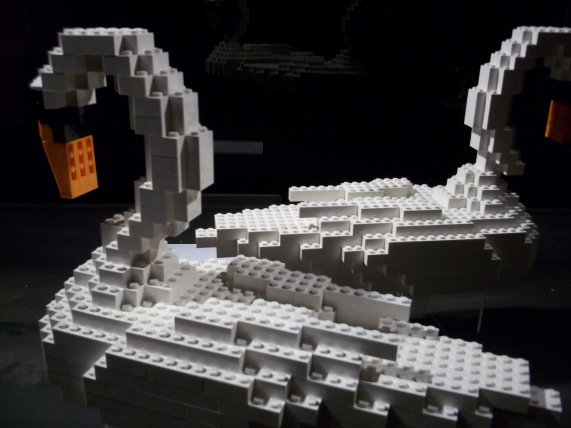 Finally, a giant LEGO hand holds individual Yellow LEGO Brick which visitors can write their names on in order to be an official participant the exhibit!

Nathan Sawaya’s The Art of the Brick runs until January 5th of next year, so you have six entire months to see it, but tickets are selling out so don’t wait too long to schedule your visit! It is a fun time for the entire family and despite the size of the exhibit you can walk it leisurely in an hour.

I love chocolate, and apparently the late, great Andy Warhol was a lifelong fan of the sweet stuff as well. Now, in homage to the Pioneer of Pop Art, Praim Group – a food licensing, marketing and distribution company – has secured an agreement with The Andy Warhol Foundation for the Visual Arts, Inc., to create and distribute a line of all-natural chocolate bars featuring the likeness of the globally famous Artist on its wrappers.

With four different designs, each wrapper also boasts one of Warhol’s famous quotes including, “All I Ever Really Want is Sugar,” “Everybody Must Have a Fantasy,” “The Idea of Waiting for Something Makes it More Exciting” and the artist’s arguably best known and definitely most misquoted saying, “In the Future Everybody Will Be World Famous for 15 Minutes.” The 3.5 ounce, all-natural “Chocolate Andy Bars,” available in both dark and milk chocolate, are an ideal collectible and perfect gift for any art fan!

Distribution outlets are still being acquired, so I can’t say how soon this edible chocolate collectible will be available at your neighborhood supermarket or specialty shop, but in the meantime the Andy Bars can be purchased for $5 each directly from the Praim Group’s website at This Link. Andy Warhol!